Avaya's 9600 IP telephone series from Telephone Magic is a feature-packed VoIP phone line for offices that need to harness the freedom and networking capabilities of IP telephony. 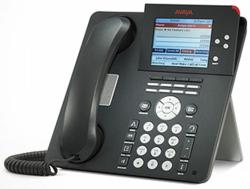 The Avaya 9600 IP phone line is the Cadillac series of IP phones from Avaya, for use with Avaya telephony platforms, such as the IP Office IP500 phone system.

The new Avaya 9600 IP phones series, also known as Avaya one-X™ Deskphones, represents the cutting edge in VoIP (Voice over IP) technology. The family includes a portfolio of phones designed to meet a wide range of end-user needs. Designed as a stand-alone portfolio, these telephones may be intermixed with other Avaya IP telephones, especially the Avaya one-X™ Deskphone Value Edition (1600 series).

Packed with all the business communications features one expects in a high-end business phone, Avaya went further with the 9600 Series IP phones and provided enhanced features with an intuitive user-interface to make these phones very user-friendly. With up to 24 programmable feature buttons, these VoIP phones give you full control over your telecommunications environment. The 9600 series of VoIP phones also makes adding or moving phones easy.

Telephone Magic Inc., a long-time online leader in Avaya IP Office phone systems and telephones, offers the Avaya 9600 series IP phone line at wholesale prices. Jeff Jackson, president of Telephone Magic, notes, "The Avaya 9600 IP phone line is the Cadillac series of IP phones from Avaya, for use with Avaya telephony platforms, such as the IP Office IP500 phone system. Our customers trust the 9600 line because of its level of sophistication and reliable nature. They purchase them for their busy call centers, offices, and remote sites where multiple offices are linked together by VoIP technology."

The Avaya 9650C IP phone is for receptionists and contact center agents - anyone who manages a large volume of calls. It delivers advanced capabilities like built-in button functions for one-touch access to bridges and feature keys. Supports a 1/4 VGA color screen. Specifically made for navigator telephone users that answer many incoming calls, transfer callers, and monitor bridges appearances throughout the day. The 9650C supports built-in button module functionality to provide simple one-touch access to bridged appearances, speed dials, and feature keysand sports 8 physical buttons with shift capability to 16.

Jackson says, "The 9600 IP phone line represents the cutting edge in VoIP telephony from Avaya. Our clients love this line - the phones generally never break down, unless they are literally thrown at a brick wall, and they are really easy to program and use. The fact we also sell them at wholesale prices, our customers end up paying the same price as they would for less robust IP phones. That is how we build long-lasting relationships with our clients."