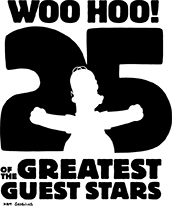 When you look at the guest stars over the years, they read like a who's who of music, movies and television. I, for one, have made room on my shelf for all the amazing action figures that will be part of this program

National Entertainment Collectibles Association (NECA), entertainment conglomerate and global leader in licensed consumer goods, in association with Twentieth Century Fox Consumer Products (FCP), has announced an exclusive global merchandise program around the groundbreaking animated series, THE SIMPSONS. The limited-edition boutique collection, announced today at Licensing Expo 2013, will feature twenty-five of the greatest guest stars who have appeared as themselves on The Simpsons. The first five guest stars to be featured will include James Brown, Tom Hanks, Kid Rock, Yao Ming and Hugh Hefner.

Available to consumers in early 2014, the limited-edition boutique collection will feature diverse product roll-outs, highlighting the guest stars’ animated likeness as depicted on The Simpsons. Additional celebrities showcased for the program will include other iconic music sensations, award-winning actors, actresses, sports heroes and more. New products will be introduced every two to three months, containing different groupings of guest stars, with limited quantities available at select pop-up shops and retailers worldwide.

“We are honored to celebrate a show that continues to entertain generations of fans,” said Joel Weinshanker, president and COO at NECA. “When you look at the guest stars over the years, they read like a who's who of music, movies and television. I, for one, have made room on my shelf for all the amazing action figures that will be part of this program.”

“This unique partnership with NECA brings to life one of the many distinctive attributes of THE SIMPSONS: its unmatched guest star roster,” said Roz Nowicki, executive vice president of global sales and retail at Fox Consumer Products. “Developed with THE SIMPSONS fan in mind, this inspired product line will feature some of the greatest guest stars from the series and is sure to engage consumers around the world.”

The longest running scripted show in television history, THE SIMPSONS exploded into a cultural phenomenon in 1990 and has remained one of the most groundbreaking and innovative entertainment franchises, recognizable throughout the world. Matt Groening created the iconic family: Homer, Marge, Bart, Lisa and Maggie. Currently in production on its record-annihilating 25th season, THE SIMPSONS celebrated their historic 500th episode in February 2012. The series has won 27 Emmy Awards, been the subject of a hit feature film, created “Krustyland” and a revolutionary virtual coaster – The Simpsons Ride – at Universal Studios, received a Star on The Hollywood Walk of Fame, been honored with five U.S. postal stamps personally designed by Matt Groening, and named the “Best Show of the 20th Century” by Time Magazine.

The Simpsons is a Gracie Films Production in association with 20th Century Fox Television. James L. Brooks, Matt Groening, and Al Jean are the Executive Producers. The Gracie Films Worldwide Brand Division develops and produces the licensed content for the series. Film Roman is the animation house.

National Entertainment Collectibles Association Inc. is a media and entertainment company operating in the United States and internationally, with three segments: Consumer Products, Filmed Entertainment and Online Retail/Digital Distribution. NECA is the leading designer, marketer, and worldwide distributor of licensed entertainment consumer goods based on some of the world’s most established and beloved properties, providing products across all consumer categories and distribution channels. Together, NECA’s divisions provide a comprehensive, end-to-end solution to elevate each property, maximizing exposure and reach, while protecting the vision of the creator. As a result of NECA’s singular passion and reverence for the intellectual property backing its products, some of this generation’s most recognized content creators enjoy working with NECA, allowing us to help bring their vision to their audience. For additional information, visit http://www.necaonline.com.