The 17-minute web-documentary, created by former ESPN 30 for 30 director Adam Kurland, unveils the mystery behind and sudden disappearance of Morganna Roberts, also known as the Kissing Bandit of Baseball. Roberts, a cultural icon, ran onto the field over 50 times to kiss athletes such as Pete Rose and George Brett from the late 1960's-early 1990's, only to drop off the face of the earth...click below to watch the documentary: http://www.roopstigo.com/reel/morganna-a-kissing-bandits-mystery/. 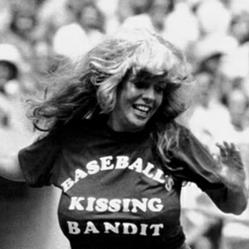 On Tuesday, May 14th, Roopstigo Mobile Sports Network (roopstigo.com) debuted its latest piece of original sports video content, "Morganna: A Kissing Bandit's Mystery," a 17-minute web-documentary by former ESPN 30 for 30 director Adam Kurland. The documentary registered more than 100,000 unique views and was featured on the likes of Deadspin.com, NBC's HardballTalk.com, TheBigLead.com, and received critical acclaim via social media from personalities such as ESPN's Buster Olney and NBC's Joe Posnanski. The piece serves as the latest example of Roopstigo's success as an early stage multimedia platform for producing and distributing free original sports content.

In 1969, Morganna Roberts, not yet known as the “Kissing Bandit,” ran onto Riverfront Stadium’s infield and kissed Pete Rose. The act, simple enough, caused a stir in the reserved sanctum of Major League Baseball. But to the surprise of everyone, Morganna followed this up with repeat performances that spanned the next 30 years, planting her lips on over 50 athletes and being unofficially dubbed the first lady of baseball.

However, despite her willingness to flaunt her 60-inch chest and embrace her own celebrity with late-night show appearances and news stories, Morganna kept her own life incredibly private. To this day, the line between fact and fiction is blurred, making Morganna ever more fascinating. In this short documentary film, director Adam Kurland takes a look back at this novelty act and attempts to find some clarity from the obscured path that Morganna left behind.