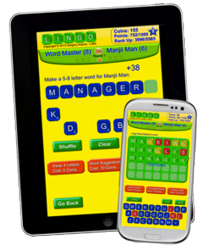 Lingo is a tough yet engaging mobile game that gives you the chance to challenge not only others, but also yourself.

A new word puzzle game that allows users to challenge and stump their friends has hit the mobile market with the launch of Manjii Lingo.

The app, officially made available for iOS and Android devices June 19, is the only game of its kind similar to the popular “Lingo” program on the Game Show Network in which users create words for each other. The mobile game allows users to play with their friends or with random players from around the world.

“Lingo is a tough yet engaging mobile game that gives you the chance to challenge not only others, but also yourself,” said Gregory Adams, the app’s developer. “I’m very pleased to launch this game on both the iOS and Android platforms, giving users with all different types of mobile devices the ability to download it and start playing right away.”

Lingo works by allowing users to send their friends five- to eight-letter words to guess, providing only the first letter. The opponent then must guess words that contain the same number of letters, with each turn color-coded to offer a new clue. If opponents do not guess correctly in five turns, they get a strike, with the first person to get three strikes losing the game. Users can also earn points by correctly solving their opponents’ words or by creating a word for others to guess, as each letter comes with its own point value.

Word games are highly popular in the mobile app market, with games like Words With Friends and Wurdle consistently among the most downloaded at the App Store and on Google Play. Lingo adds a new twist, as users can come up with a nearly unlimited number of words to stump their friends. It also features a multiplayer mode, and users have the option to sign in via Facebook.

Adams, 34, developed the game himself, taking about six months and more than 1,000 hours of work to complete it.

“This app required a great deal of effort and an enormous time investment, but I’m very pleased with how it turned out,” said Adams. “This is a game that has been created by someone who has a true love of word games and puzzles, and I think users will find it to be quite addicting once they get playing with their friends.”

Lingo is part of Manjii Games, a network of interactive mobile apps that test users’ word knowledge and skill. Adams is also the creator of Wordbitz, a game that combines word comprehension and strategy, and he plans to release more games in the near future.

Manjii Lingo is now available for free at the App Store and on Google Play. To learn more about the game, visit http://manjii.com/Lingo.