David Kikoski, the late Dave Carpenter, Gary Novak and Bob Sheppard gather on stage with no rehearsal and just the knowledge of the “changes." 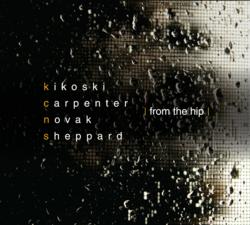 Gathering the great musicians of our day to present a “Standards” program can be a task that does not always garner the respect of critics and fans alike. However, when done well, it can demonstrate the emotion and depth behind these historic melodies, and even more so the power and focus of these brilliant musicians. The essence of the jazz experience is musicians coming together to express their individual voices and blend them together as one. As Bob Sheppard states, “That is the reason we create music together. It is to share the experience of the music in the moment.” “From The Hip” (BFM Jazz) is THAT moment.

On May 21, 2006, a small studio audience witnessed four of the finest musicians around assemble to take the “Standards” task to hand. George Klabin, President of the Rising Jazz Stars Foundation, invited premier Jazz pianist David Kikoski to perform at a special live audience concert at his private studio in Beverly Hills. This project is a select documentation of that day’s performance.

The quartet takes on nine selections ranging from Cedar Walton’s “Bolivia” to Chick Corea’s “Tones for Joan’s Bones” to John Coltrane’s “Mr. PC.” Alongside these classics come outstanding moments on the recording with the classic “My One and Only Love” and a heartfelt “Autumn Leaves.”

To fill out the group, Kikoski hired some of the finest musicians on the planet for the event. For the tenor chair, he called in Bob Sheppard. “Shepp,” as he is known to some, has numerous distinguished collaborations, which include eight years with Freddie Hubbard, and tours and performances with Chick Corea´s ensemble Origin, Mike Stern, Randy Brecker, Horace Silver, Lyle Mays, Nat Adderly and the Toshiko Akiyoshi/Lew Tabackin Big Band. Some of his more significant recording credits include Steely Dan, Rickie Lee Jones, Randy Newman and Stevie Wonder.

When four jazz musicians gather on stage with no rehearsal and just the knowledge of the “changes,” the real spirit of the music that we call jazz occurs. This is different. Enter into the Standards biosphere of KCNS.

For More Information go to: http://www.bfmjazz.com