The Global Justice Center lauds the Security Council for passing Resolution 2106 on June 24, 2013. This marks the first time a Security Council Resolution explicitly calls for UN entities and donor countries to provide “non-discriminatory and comprehensive health services, including sexual and reproductive health,” representing a significant milestone for girls and women impregnated through war rape. 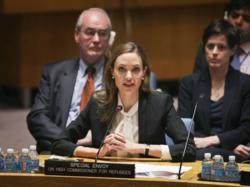 "Young girls raped [are] and impregnated before their bodies are able to carry a child.” -Angelina Jolie

Today, the United Nations Security Council unanimously passed Resolution 2106 addressing sexual violence in armed conflict during a debate led by the United Kingdom. Significantly, for the first time, a Security Council Resolution explicitly calls for UN entities and donor countries to provide “non-discriminatory and comprehensive health services, including sexual and reproductive health.” The Global Justice Center applauds the inclusion of this language, which represents a milestone for girls and women impregnated through war rape.

During the debate, UN Special Envoy Angelina Jolie spoke forcefully on the deadly effects of war rape: “Let us be clear what we are speaking of: Young girls raped and impregnated before their bodies are able to carry a child.”

The significance of the inclusion for the need to provide non-discriminatory health services to women cannot be overlooked and is essential to address a problem that is too often ignored – forced pregnancies from war rape. In order for the medical care provided to girls and women impregnated from war rape to truly be comprehensive and non-discriminatory, it must include the option of safe abortion. As GJC President Janet Benshoof explains, “Although the word ‘abortion’ was not used, the ‘non-discriminatory health services’ provision is an enormous breakthrough in the fight to end the deadly denial of abortion for female victims impregnated by war rape.”

The language on the need to provide non-discriminatory medical care, including by donor states, follows from the Secretary-General’s 2013 Report on sexual violence in conflict to the Council, which called for the inclusion of safe abortion services to be included as an integral part of care to victims of war rape.

In 2010, the GJC launched the August 12th Campaign, named after the anniversary of the Geneva Conventions, to end the near universal denial of abortions for girls and women raped in war. The GJC has been educating donor countries, women’s, legal and human rights organizations and the United Nations about the rights of women to non-discriminatory medical care under the Geneva Conventions. The Campaign also seeks an executive order from President Obama lifting devastating US abortion restrictions on humanitarian aid for girls and women raped in armed conflict.

Benshoof lauds the UK “for its leadership on combating sexual violence, both for Foreign Minister Hague’s Preventing Sexual Violence Initiative and for being the first country to explicitly recognize the right to abortion under the Geneva Conventions.” Benshoof also notes that “while the United States played a significant role in the passage of the resolution, US abortion restrictions on foreign assistance directly undermine the Council’s call for all donor countries to provide non-discriminatory medical care to war rape victims.”

The Resolution’s call for non-discriminatory medical care was supported during the debate by several countries, including France, the Netherlands and Sweden speaking on behalf of all Nordic countries. The Dutch highlighted that medical care must be provided in accordance with international humanitarian law and include access to safe abortion and emergency contraception.
Benshoof adds as a final note that “the global community had taken it upon itself to protect girls and women raped in armed conflict; a commitment that’s made clear by the Security Council’s seven resolutions addressing sexual violence in armed conflict. The denial of abortion to war rape victims is deadly, inhuman and cruel, and Resolution 2106’s mandate to provide comprehensive and non-discriminatory health services seeks to end this egregious wrong against these victims.”

Girls and women are entitled to non-discriminatory medical care under the Geneva Conventions, including safe abortion services, and today’s resolution represents a huge step forward towards ensuring these rights on the ground. Now it’s time for donor states to comply with their legal obligation under this Resolution.

The term “non-discriminatory medical care” has a very distinct meaning under international humanitarian law, which governs situations in armed conflict. The Geneva Conventions contain absolute guarantees of the comprehensive medical services for all persons “wounded and sick” in armed conflict and the prohibition against discrimination, while recognizing that biological differences might require different medical treatment for women, mandates that the medical outcome for women war victims cannot be less favorable that for male victims. Therefore, the denial of abortions as part of comprehensive medical care for war victims violates the Geneva Conventions.

In an letter to President Obama on April 13th, Prof. Louise Doswald-Beck, the former head of the legal division of the International Committee of the Red Cross, details a compelling analysis of how the denial of abortion to girls and women impregnated by war rape is unlawful under common Article 3 of the Geneva Conventions and customary international law: