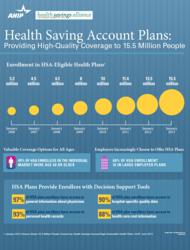 Nearly 15.5 million Americans are covered by Health Savings Account (HSA)-eligible insurance plans, an increase of nearly 15 percent since last year, according to a new census released today by America’s Health Insurance Plans (AHIP). The census also found that the greatest enrollment increases were in the large group market, which represents nearly 70 percent of all enrollment in health savings account/high-deductible health plans (HSA/HDHPs) in 2013.

HSA plans were authorized by Congress starting in January 2004. Since then, AHIP has conducted an annual census of the number of people covered by HSA/HDHPs. This year’s census shows that enrollment in HSA plans has more than tripled over the last six years, from 4.5 million enrollees in January 2007 to 15.5 million in January 2013.

Key findings from the census include:

Consumer Decision Support Tools for HSA Enrollees
The census also found that the vast majority of individuals enrolled in a HSA plan have access to a variety of tools and resources, including information for selecting appropriate providers and hospitals, to help make more informed health care decisions for themselves and their family members.

To learn more about the value of HSA plans, visit the Health Savings Alliance at http://www.hsaalliance.org.