As part of the Sochi 2014 Cultural Olympiad, Saint Petersburg is next in line for the "Peace Bench" art project. 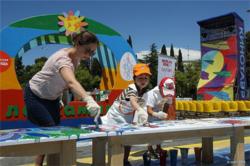 During the entire summer, the benches will bring joy to the visitors of the Mikhailovsky Garden, and later 20 of them will be moved to the Sochi Olympic Park

As part of the Sochi 2014 Cultural Olympiad, Saint Petersburg is next in line for the "Peace Bench" art project. Famous Saint Petersburg artists will paint 30 benches in the northern capital, many of which will form part of a collection in the Olympic Sochi for the 2014 Games.

The painting of the "Peace Benches" will begin in front of the Russian Museum in the Mikhailovsky Garden (near Mikhailovsky Palace) on June 29 at 10:00 and will continue late into the evening.

The State Russian Museum is home to a unique collection of art treasures including more than 40,000 Russian and Soviet paintings, sculptures, and drawings.

The participants in the event will include famous Saint Petersburg artists, members of the International Federation of artists (IFA) and of Artists Trade Union of Russia - Oleg Yakhnin, Alexey Kiryanov and Anatoly Zaslavsky.

They will be assisted by student-apprentices from orphanages and schools of Saint Petersburg and the Leningrad Region. In addition, anyone visiting the Russian Museum's Mikhailovsky Garden on that day can also participate.

During the entire summer, the benches will bring joy to the visitors of the Mikhailovsky Garden, and later 20 of them will be moved to the Sochi Olympic Park. Together with benches painted in other cities, they will decorate the Olympic capital of the first ever Winter Games in Russia.

"Peace Benches" painting events have already been successfully held in Sochi and Moscow, where more than 300 benches in total were painted.

The fourth year of the Sochi 2014 Cultural Olympiad is dedicated to museums. As always, the organizers of the first Winter Games in the history of Russia will present the public with hundreds of the best cultural events. These include dozens of exhibitions, shows, competitions, festivals, and special exhibitions, as well as forums, workshops and educational programs that will be held throughout the country.

The Sochi 2014 Cultural Olympiad is a unique project by the organizers of the Games, offering the best cultural events in the country. In 2014, visitors to the Olympic host city will be able to admire not only the sports competitions, but also Russia's cultural diversity at dozens of special sites located in Sochi and Krasnaya Polyana. Therefore, since 2010, the Sochi 2014 Organizing Committee, along with dozens of regions throughout the country, has been carefully selecting the best that Russian culture has to offer.

The national scale of the project will make it possible to get every resident of the country involved in this grand cultural celebration, whilst preserving and adding to the cultural riches of our country. Updates about all the Cultural Olympiad events can be found on the portal at: http://www.culture.sochi2014.com.