Produced by Craig N’ Co, and sponsored by AJWS, the Jewish Journal and the Jewish Histocial Society of Souther California, the Pico Union Project introduces the first annual Downtown Seder on Sunday, March 17th, from 2:00pm-4:00pm. While not exactly a seder, this multi-faith Passover experience provides inspiration and insight through song, stories, music and more celebrating the themes of Passover: Rising up from Oppression, Finding our Freedom and the Journey to a Promised land. 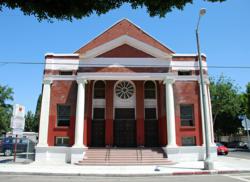 Craig Taubman, Pico Union Project's founder, shares, “We are honored to host this important event celebrating Passover's universal message of freedom. I am especially pleased that Ruth Messinger will be joining us, who has been an inspiration for years.

The experience will include eclectic performances by Gabriel Mann, Naomi Ackerman, Body Traffic accompanied by Duvid Swirsky, Stuart K. Robinson, Cantor Tannoz Bahremand, the first Persian cantor ordained in the United States and Ben Youcef. This multi-faith pre-Passover experience introduces the community to the Pico Union Project, in a revival of the historic site of the first Sinai Temple, built over 105 years ago and has served as the Welsh Presbyterian Church for the last 80 years.

“American Jewish World Service is honored to co-sponsor the first Downtown Seder with the Pico Union Project, which is focused on fostering connections across Los Angeles’s diverse faith communities in the common quest for social justice,” said Ruth Messinger, President of American Jewish World Service. “The Passover story is about moving from slavery to freedom and showing respect for the strangers who live among us, a perfect theme for bringing together a diverse group of Los Angelenos who are committed to a better world.”

The Downtown Seder is Sunday, March 17th at the Pico Union at 1153 Valencia, Los Angeles, CA 90015. A light reception will follow the experience. Participants are encouraged to bring a non-perishable sealed food item for donation to the World Harvest food bank in Pico Union. For more info and secure “choose your own contribution level” tickets go to downtownseder.eventrbite.com. The Jewish Journal will be live-streaming the program at http://www.jewishjournal.com/downtown_seder.

PICO UNION PROJECT: In an historic sacred space, the Pico Union Project seeks to foster a more interconnected Los Angeles, by cultivating collaboration, celebration and understanding among people of different faith, ethnic, and cultural traditions via the arts, social justice and learning.

AMERICAN JEWISH WORLD SERVICE is the leading Jewish organization working to promote human rights and end poverty in the developing world. We support more than 400 grassroots organizations in Africa, Asia and the Americas that promote the rights of women, girls and LGBT people; rebuild societies torn apart by war and natural disasters; and seek to secure access to food, land and water. In the United States, we mobilize our supporters to advocate for U.S. policies that help create a just and equitable world. We are inspired by Judaism’s commitment to pursue justice and repair the world, and we believe that Jewish history teaches us to respect and fight for the rights of others.