Falkor Systems Will Change the Way the World Thinks About Drones 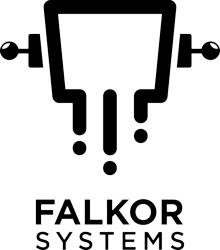 Falkor's technology will let us film up close and personal with our athletes, filming from angles we could not have conceived of before, angles not possible even from helicopters. --Darrell Miller, Storm Show Studios

The fiction of flying robots has become a reality. Will they be friend or foe? Falkor Systems is on a mission to change the conversation about drone technology. Profiled in Wired UK's April 2013 "Robots We Love" issue as developers of the “flying pet drone,” Falkor Systems is driven by the possibilities of what a cheerful autonomous flying robot can do. Founded by C2Net Software founder and internet security pioneer Sameer Parekh, Falkor Systems joins the field of aerial robotics with innovative tracking software and an ambition to see robots as man's best friend.

Falkor Systems Takes Flight (And Pictures of Your Motocross Rally)

Falkor Systems' possibilities are on the cutting edge, and will take the leap. Imagine an attendant pet drone hovering to record the perfect BASE jump, best half-pipe, or epic day of skiing. Leave the camera behind and let Falkor film the action -- innovative object tracking technology will ensure that the flying robot follows the athlete. And Falkor Systems is only getting started.

“This technology has the potential to change the way we live and enrich our lives,” says company founder and C.E.O. Sameer Parekh. Parekh envisions a near-future of flying robotic pets that are far more than toys for the tech-minded. "When you're not cliff-diving, your robot friend could carry your keys, remind you to get the milk, and Tweet a picture of your lunch so you don't have to. With Falkor Systems, the sky's the limit: flying robots that offer a dynamic engagement with your world and unleash your creativity."

Falkor has engaged top extreme sports film producers to test the technology. "At Storm Show Studios [http://www.stormshow.com/ ], our films are not only about skiing the lines. They capture the thrill and the aftermath, that feeling of accomplishment," said Darrell Miller, filmmaker and advisor to Falkor Systems. "Falkor's technology will let us film up close and personal with our athletes, filming from angles we could not have conceived of before, angles not possible even from helicopters."

"At antigravityBASE [http://shop.antigravitybase.com/ ] we are always looking for technology that will let us film BASE jumping in new, compelling ways," said Matt Frohlich. "Although people are already filming BASE with micro aerial vehicles, no one yet is able to film autonomously, with the craft tracking the athlete. Autonomous tracking will let us create a very intimate connection between the viewer and the athlete."

“Awesomely advanced robotics are the future, and we think their potential is very human,” Parekh explains. While many current firms are focused on reaching the hobbyist market, Falkor Systems will sell an out-of-the-box model concept that will be ready to fly -- no tinkering required. “We like cool stuff, and we like to build it,” adds Parekh. The company is well-connected to the cutting-edge in academic robotics research, counting top researchers in vision, aerial robotics, and multimedia among its advisory board

Parekh has demonstrated Falkor's cutting-edge tracking technology at TEDxSiliconAlley [http://falkorsystems.com/2013/03/08/falkor-tedx-video-available-2/ ] and Maker Faire. Recently, Falkor Systems collaborated with dancers from the Barkin/Selissen Project [http://www.barkinselissenproject.com/ in a short film that showcases the evolution of the human-robot relationship happening right before our eyes. In this film, the robot flies autonomously, dancing with its human partners, but without a human pilot. Take a look: [http://falkorsystems.com/2013/03/11/pet-drone-pas-de-deux-teaser/ ]

"Working with Falkor's robot pet during the dance film shoot opened our eyes to the possibilities this technology holds," said Kyla Barkin. "A robot that flies autonomously is a perfect vessel for the expansion of our ideas and our ability to achieve our evolving artistic vision."

Founded in 2012 and based in New York City, Falkor Systems [http://falkorsystems.com/ ] will provide a next-generation companion for anyone who wants to reach beyond their horizons. Their technology follows people's imagination everywhere on film, whether they're facing the perilous terrains of extreme sports or capturing the delicate gestures of an intimate performance piece. Falkor’s autonomous flying robots represent freedom and flexibility that allow the world to see what’s in front of it and imagine what’s ahead.