In recognition of Multiple System Atrophy Awareness Month, The MSA Coalition is sponsoring a national letter-writing day on March 28, 2013 to bring awareness to members of Congress that 30 million Americans with rare diseases, including 15,000 with MSA, are suffering and in need of research to find cures. 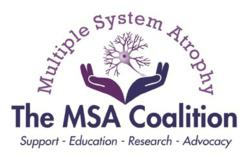 Multiple System Atrophy is a rare and fatal disorder.

The Multiple System Atrophy Coalition (formerly the SDS/MSA Support Group) is sponsoring a national letter-writing day for those impacted by multiple system atrophy (MSA). The campaign, which will take place on March 28, will target letters to both houses of Congress and to the President of the United States. The goal is to educate elected officials on the devastating impact of multiple system atrophy on the lives of patients, caregivers and their families, and to ask Congress to:

“MSA is a rare and fatal disorder,” stated Judy Biedenharn, co-President of The MSA Coalition. “There are fewer than 15,000 Americans currently diagnosed with this disease and perhaps another 35,000 have yet to be diagnosed. As such, it is critical that the MSA community band together to make our collective voice heard. We need Congress to support rare disease causes as approximately 7,000 rare diseases affect more than 30 million Americans. Like too many rare diseases, multiple system atrophy has no known cause and a cure is desperately needed.”

“Writing letters to elected officials about multiple system atrophy is a wonderful way to spread awareness and to help ensure our lawmakers keep rare disease research in mind as they pass legislation,” continues Mrs. Biedenharn, whose husband Ned passed away from MSA 10 years ago. “In order to encourage a large number of letters from the MSA community, The MSA Coalition is leveraging online tools available through the Rare Disease Legislative Advocates (RDLA) website. The RDLA has established an Action Alert portal specifically for the multiple system atrophy community. The portal makes it easy for constituents to identify their members of Congress and to compose an effective letter. Really, all we need is for as many people from the MSA community as possible to log on and tell their story. The rest is already done.”

MSA is a rare and fatal disorder with less than 15,000 Americans diagnosed and 35,000 undiagnosed at any given time. According to the National Institutes of Health, "Multiple system atrophy is a progressive neurodegenerative disorder characterized by symptoms of autonomic nervous system failure such as fainting spells and bladder control problems (neurogenic orthostatic hypotension), combined with motor control symptoms such as tremor, rigidity, and loss of muscle coordination. MSA affects both men and women primarily in their 50s. MSA tends to advance rapidly over the course of nine to 10 years, with progressive loss of motor skills, eventual confinement to bed, and death. There is no remission from the disease. There is currently no cure is available."

About The Multiple System Atrophy Coalition

The MSA Coalition, formerly the SDS/MSA Support Group changed its name on March 1, 2013 in order to better reflect its mission as a 501(c)3 charitable organization representing the multiple system atrophy community. Started as a patient/caregiver support group nearly 25 years ago, the MSA Coalition now has a four-pillar mission:


For more information or to donate to The MSA Coalition, please visit: http://www.MultipleSystemAtrophy.org