In the first vaginal mesh case in the country to go to trial against Johnson & Johnson and Ethicon, a New Jersey jury awarded Mazie Slater's client, Linda Gross $11.1 million in compensatory damages and punitive damages. The jury found that J&J was guilty of fraudulently misrepresenting the dangers of the Gynecare Prolift mesh which was used to repair Ms. Gross's pelvic organ prolapse and failing to adequately warn her surgeon of the dangers of the product. 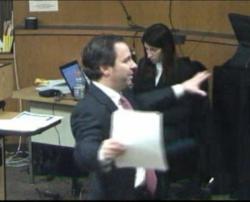 Adam Slater speaking to the jury.

$11.1 million in compensatory and punitive damages was awarded by a New Jersey jury in the first trial in the country to hold Johnson & Johnson/Ethicon liable for its highly controversial and widely implanted Prolift surgical vaginal mesh repair product for the repair of prolapse. (In re Pelvic Mesh/Gynecare Litigation, Master Docket No.: ATL-6341-10, Case No. 291). The trial team was led by Mazie Slater Katz & Freeman partners, Adam Slater and David Mazie. Adam Slater has taken a lead role in the consolidated Johnson & Johnson/Ethicon mesh proceedings and is the co-liason counsel for all of the pending cases before Judge Higbee in Atlantic City, New Jersey. Mazie Slater represents hundreds of women from around the country injured by vaginal mesh.

The New Jersey Superior Court jury awarded Linda Gross, RN and her husband, Jeff Gross $7.76 million in punitive damages following an evidentiary hearing in which her attorneys argued that J&J/Ethicon deserved to be held financial responsible to the fullest extent of the law for their actions.

“Linda Gross cannot turn back the clock and make her misery and pain disappear,” said trial counsel, Adam Slater. “But she and countless victims like her can take some comfort in knowing that a jury of six women and three men decided after long and serious deliberations that the corporations responsible for their suffering should be severely punished financially.”

Ms. Gross, 47, of Watertown, S.D., testified at the six-week trial, that she had 18 subsequent unsuccessful revision procedures following the initial surgery. She has described her life after surgery as a “living hell” and has characterized she and thousands of other women as “guinea pigs” to the vaginal mesh maker.

She contended that Johnson & Johnson and Ethicon knew – and never warned prospective patients - based on its own studies that the Prolift transvaginal mesh was prone to complications and still aggressively marketed its use to physicians. The jury found that Johnson & Johnson and Ethicon failed to provide adequate warnings and that they had intentionally committed fraud against Mrs. Gross regarding the surgical mesh.

Adam Slater delivering a point to the jury during closing argument.