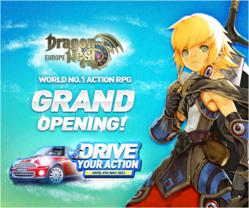 Together with the official launch of Dragon Nest Europe, a great chance to win a MINI Cooper Roadster is open to everyone.

The World’s No.1 action RPG, Dragon Nest has finally arrived in Europe after the successful launch of the Closed Beta test. Since eFusion MMOG reached the goal of 8,000 concurrent users last week, all player achievements during the Closed Beta have not been reset as promised.

“This is the first time launching Dragon Nest in Europe and the first time we launch it in multiple languages since we developed the game. We will stay connected to the European players so we can keep releasing even more content while trying to meet their expectations at every possible step”, Mr. Joon Myung Jung, Producer of the Title from Developing Company Eyedentity Games declared.

Together with the official launch of Dragon Nest Europe, a great chance to win a MINI Cooper Roadster is open to everyone. To win the amazing prize, players are required to participate in the 'Drive Your Action' event now and fulfill two conditions; inviting at least 5 friends into Dragon Nest Europe and collecting more than 50 MINI Cooper Keys in-game. Only one winner will be randomly selected among the candidates and the result will be announced in May.

To keep things interesting, there are bunch of Kick-Off events running at the moment. For a limited time only, during the weekend, a special in-game Pet will be given away. All players will also be encouraged to level up and create their guild to get exclusive rewards for the whole month of March. Now is the time to start the epic adventure in-game and drive action to win a MINI Cooper Roadster. More details of the events will be found on Dragon Nest Europe official web site: http://www.dragonnest.eu

About Dragon Nest
Dragon Nest is a free-to-play online action RPG developed by Eyedentity Games. Its dynamic action oriented game-play and high quality graphics make this game unique and clearly different from other RPGs. Since the game was released in various countries, it has been attracting more than 200 million players over the world and 800 000 gamers are playing it at this very moment.