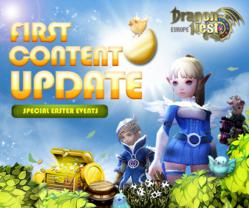 There will be a new area in the game, the Dark Lair. Furthermore, players will now be able to open the exclusive item package called Deluxe Box.

Following the successful start with 120,000 players in March, Dragon Nest Europe has its first content update on Easter and a variety of events throughout the whole month of April. There will be a new area in the game, the Dark Lair, in which players can take up arms against the looming abyss and have to survive every round. Furthermore, players will now be able to open the exclusive item package called Deluxe Box, containing one of several premium items, e.g. Magic Jellies, Special Wings or various stunning accessories. Those who have not downloaded Dragon Nest Europe so far can do so for free on http://www.dragonnest.eu/sites/en/download/client_download.asp.

During the long Easter weekend from Friday to Monday, the publisher will hold a special event in-game. The more time players stay online in the game, the more items players can get. Players even stand a chance to receive ten amazing Deluxe Boxes when playing more than three hours on all four days. At the end of April, the top players of Nests and PvP will get a great reward. In another event, some lucky players will be rewarded with both a hot game item and 1000 DNP if their invited friends level far enough until 7th April 2013.

More details regarding the April update and the Easter events can be found on http://www.dragonnest.eu.

About Dragon Nest
Dragon Nest is a free-to-play online action RPG developed by Eyedentity Games. Its dynamic action oriented game-play and high quality graphics make this game unique and clearly different from other RPGs. Since the game was released in various countries, it has been attracting more than 200 million players over the world and 800,000 gamers are playing it at this very moment.