Compulsion Pushes College Dropout To Make His Own World-Class Marimba

It was the sound--elusive but haunting--that drove a 25-year-old college student, a few classes short of a degree in psychology, to build a marimba from scratch. Now 30 years later, the world's top players are coming June 30 to Arcata for an international marimba festival--and to play Samuels' top-of-the-line instruments. 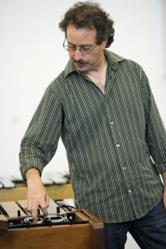 It was the sound--elusive but haunting--that drove a 25-year-old college student, a few classes short of a degree in psychology, to build a marimba from scratch.

Not knowing how to begin, he started in 1983 by merely tracing the shape of the one marimba at Humboldt State. "It was not the way to do it," Ron Samuels laughingly says today.

Back then, Samuels, who had played classical piano since the age of five, thought that the concept and theory of playing the marimba was the same. But the technique is completely different--and you still had to coax the sound from the rosewood keys.

In those days, almost every marimba was different. Originally coming from Africa as a folk instrument, the marimba was likely the first musical instrument--just imagine a caveman hitting one piece of wood with another.

Samuels' first marimba "looked cool but it was pure happenstance; only one or two keys sounded right." But he was compulsive, supporting himself by work at a tree nursery--"in the dirt eight hours a day"--and taking a lowly job sweeping and sanding at a shop in Arcata while learning about wood.

He also took six months of marimba lessons, learned how to use an electronic tuner, forgot about the college degree and met "two old guys"--Lowell Montz and Dell Roper--who gave him a one-hour tuning lesson. That was enough to get him going, with "confidence, cappuccino and craziness" and two hand-hewn instruments, to the Percussive Arts Society international convention in San Antonio in 1987--and he received two pages of comments and suggestions from the world's best marimbists.

The following year, he drove his pick-up truck to the festival location in Nashville with two newer marimbas. This time, he took only one page of notes and suggestions, got lots of encouragement--but no sales.
Undeterred, the next year he flew to Philadelphia--no longer would he drive across the country--and in 1989 got his first sale, to the music instructor at West Virginia's Glenville State College.

The teacher told Samuels "I'm taking a chance on you" because Ron showed how much love and care he put into his acoustic breakthrough product. The price then was $6,900. Note: The instructor bought another marimba 20 years later, and the cost was around $10,000 more.

Samuels still shows the same love and care in building a superior concert marimba--the refined ear that understands sound and the ability to engineer a scientifically precise resonator. With a new temperature-controlled production facility and a large staff, he doesn't work alone any more.

But thousands of marimbas later, his goal remains the same as when he started: to get the perfect, haunting and designed sound that is dark, warm and resonant as you go up and down the keyboard. His latest innovation in resonator acoustics is Basso Bravo voicing--which has just been granted patent protection by the U.S. Patent Office.

You will be able to hear it in 8 concerts during ZMF (Zeltsman Marimba Festival) starting on June 30 in Arcata.