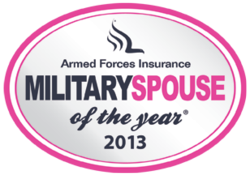 We are very excited to announce this year’s MSOY branch winners. They are nothing short of spectacular. — Babette Maxwell, Military Spouse magazine Founder and Executive Editor

The finalists for this award were selected through an online vote open to all Americans. Learn more about the Award Program and the individual Branch Winners who are in the running for the overall 2013 AFI MSOY ® Award at http://www.msoy.militaryspouse.com.

Out of these six Branch winners, the overall 2013 Military Spouse of the Year ® winner will be announced at the prestigious sixth annual MSOY Awards Ceremony in Washington, D.C. on May 9th at Joint Base Myer-Henderson Hall. Attended by VIPs from the military, government, business and more, the Awards luncheon is always celebrated in conjunction with Military Spouse Appreciation Day.

“We are very excited to announce this year’s branch winners,” said Babette Maxwell, Military Spouse magazine Founder and Executive Editor. “They are nothing short of spectacular and we look forward to the coming year as they represent their branches and all the military families in our nation. Each and every one of them would be a terrific overall winner – and we can’t wait to surprise them in May!”

The Military Spouse of the Year ® represents the millions of past and present military spouses who continue to thrive in a wartime environment, dedicate their lives and families to service of a grateful nation and give back to a community in need.

“From a highly engaged group of 169 Installation Spouses of the Year, the field was narrowed to the top eighteen. As we laud those selected to represent their service as Branch Spouse of the Year, Armed Forces Insurance wishes to also recognize the MANY contributions of all who competed” stated Garry L. Parks, Lieutenant General, U.S. Marine Corps (Ret.), Chairman Armed Forces Insurance. “Our nation’s armed forces are unquestionably stronger because of your selfless support!”