Mautner Project's 2013 Gala & Dance is a Huge Success: Highlight of the Evening Élan Noelle’s Debut Performance of Her New Hit Single “In the Light”

D.C. fundraising and support for the LGBT community was at its height last Saturday when they packed the house for the Mautner Project's 2013 Gala & Dance. The highlight of the evening’s live entertainment was a debut solo performance by Élan Noelle of “In the Light” her newly released hit single. 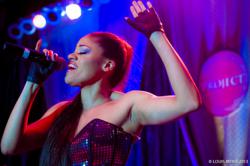 “Élan is a tremendous entertainer: she had the crowd on its feet and cheering!” Leslie J Calman, PhD Executive Director Mautner Project: The National Lesbian Health Organization.

The Gala is Mautner Project's largest fundraising event and this year it was held at the beautiful Omni Shoreham Hotel. At least a thousand supporters of the LGBT community donned on their finest formalwear and enjoyed live/silent auctions, a cocktail reception and an amazing dinner. All leading up to the Electric Rainbow Dance Party, featuring the Gem Fatales and showcasing a debut performance by Élan Noelle of her new single “In the Light."

The evening was full of fabulous food and unforgettable fun but the party really started when the Gem Fatales took the stage and “a 1000 of our guests ran to the dance floor…Everyone was blown away and asked for more, they did not want the show to end,” said Tedd Davis Director of Special Events. Then just when everyone thought the party was in full swing Élan Noelle, emerged from a quick wardrobe change and showed everyone a whole different side of her. In a solo debut performance of her new single "In the Light" the crowd felt her artistic style light up the room. Her voice, her smile and her energy pushed the event to another level. “Élan is a tremendous entertainer: she had the crowd on its feet and cheering!” said Leslie J Calman, PhD Executive Director Mautner Project: The National Lesbian Health Organization. Élan has enjoyed performing with the Gem Fatales for several years and is now reaching out and introducing her own brand of music and style to the pop and R&B music scene.

For additional information on Élan Noelle’s Debut Performance of Her New Hit Single "In the Light" contact the 707 Entertainment Group.

About: Élan Noelle is singer, songwriter and producer whose talent brings a freshness to the Pop and R&B music scene that is blended with nostalgic nuances from the 80’s Pop and R&B dance tracks. Élan’s writes all her own music and has a new self-produced album filled with an upbeat style that is aimed at making her audience want to get up and dance. She has many years of experience performing and singing on stage with her sisters in the group Zephyra before she became a solo artist. Most recently Élan opened for Lyfe Jennings at the Howard Theatre in Washington D.C. and she can be seen hosting the hottest parties in D.C area dance clubs, as well as, appearing in T.V. commercials and local theatre.