Amy Mansue, of Hightstown New Jersey, president of the nation's largest pediatric rehabilitation hospital inducted into the New Jersey Women's Hall of Fame by the YWCA of Trenton. 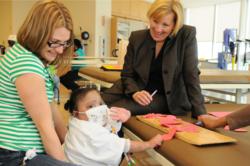 “Amy continues to inspire others by her example of empowering women to succeed, and children and their families.” said Robin Walton, director of Community and Government Affairs at Thomas Edison State College.

Children’s Specialized Hospital is proud to announce the recent induction of Amy Mansue, president and chief executive officer, Children’s Specialized Hospital and resident of Hightstown into the 2013 New Jersey Women’s Hall of Fame presented by YWCA in Trenton. New Jersey Women’s Hall of Fame inductees are women who have made invaluable contributions to their career fields, and have exemplified the YWCA’s goal of eradicating racism and empowering women to better the lives of those living in their community.

Ms. Mansue’s induction into the New Jersey Women’s Hall of Fame is a reflection of the accomplishments she has achieved throughout her career. Since 2003, she has been responsible for the operations and management of Children’s Specialized Hospital, the largest provider of pediatric rehabilitation services in the country. Previously, she served as deputy chief of staff for former New Jersey Governors’ Jim Florio and James McGreevey. In 1993, Ms. Mansue oversaw programs for children, people with developmental disabilities, and Medicaid as deputy commissioner in the New Jersey Department of Human Services. Ms. Mansue also served as vice president of Cablevision, senior vice president of strategic development for the Health Insurance Plan of New York, and president of the Health Insurance Plan of New Jersey.

The YWCA, host of the New Jersey Women’s Hall of Fame inauguration, is the oldest and largest multicultural women’s organization in the world. The organization has over 25 million members in 122 countries, including 2.6 million members and participants in 300 local associations in the United States. The YWCA focuses on building dedicated female leaders, providing safe environments for women in need, and promotes women’s civil rights.

Children’s Specialized Hospital is the preeminent provider of rehabilitation services for children with special needs. The hospital serves children affected by brain injury, spinal cord injury, premature birth, autism, developmental delays, and life-changing illnesses. Children’s Specialized Hospital has nine sites in New Jersey and treats 20,000 children each year, making it the largest pediatric rehabilitation system of its kind in the nation. Services include outpatient services, acute rehabilitation, and long-term care through its sites in Bayonne, Clifton, Egg Harbor Township, Mountainside, Toms River, Fanwood, Hamilton, New Brunswick and Roselle Park as well as outreach programs in many communities. Children's Specialized Hospital is a proud member of the Children's Miracle Network Hospitals. Children’s Specialized Hospital Foundation supports the programs and services of the hospital. The Foundation is ranked among the top six pediatric hospital foundations in the country. To help, or find more information: visit http://www.childrens-specialized.org; join us on Facebook http://www.facebook.com/childrensspecialized, or follow us on Twitter @ChildrensSpecNJ.