Ashley holds 2-pound, 3-ounce lead heading into day two of the four-day event that features 176 of the world’s best bass-fishing anglers competing for a top cash award of up to $125,000. 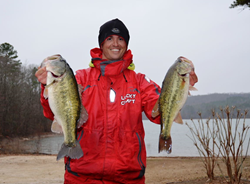 FLW Tour rookie Casey Ashley jumped out in front with his 21-pound, 7-ounce bag on day one at Lake Hartwell.

I’m keeping an open mind right now, because I have no clue what these fish are going to be doing. Tomorrow may be a completely different story.

Despite a day that featured cold, windy and rainy conditions that drastically changed the patterns that were established in practice, FLW Tour rookie Casey Ashley of Donalds, S.C., brought a five-bass limit to the scale weighing 21 pounds, 7 ounces to take the lead on day one of the Walmart FLW Tour on Lake Hartwell presented by Ranger Boats.

Ashley will hold a 2-pound, 3-ounce lead over fellow rookie pro Skip Johnson of Goodells, Mich., heading into day two of the four-day event that features 176 of the world’s best bass-fishing anglers competing for a top cash award of up to $125,000.

“I had no clue that I would catch that much,” said Ashley, who has nine career top-10 finishes in Rayovac FLW Series and BFL circuit competition. “I had some good stuff that I had found in practice and I caught some pretty good fish. But today was brutal. I fished some stuff that had gone well in practice and didn’t get bit today. I caught my better fish today on stuff that I didn’t even practice. I was only able to fish what was protected, and I didn’t get to fish all of my areas today.”

Ashley was not yet ready to divulge any bait specifics, but he did say that he caught the majority of his fish using only three rods. He estimated that he caught around 20 fish today, and his five-bass limit consisted entirely of largemouth.

“I did weigh in all largemouth, but I had several spotted bass in the livewell that I culled through,” Ashley said. “To be honest, I caught more spots in practice than I did largemouth. I like to catch them shallow, but I’m a junk fisherman. I’ll do whatever.

“Hopefully I can run some of my different areas tomorrow if the wind doesn’t blow quite as hard,” Ashley went on to say. “I’m keeping an open mind right now, because I have no clue what these fish are going to be doing. Tomorrow may be a completely different story.”

The top 10 pros after day one on Lake Hartwell are:

Keith Amerson of Bethel Springs, Tenn., won the Big Bass Award on the pro side with a fish weighing 6 pounds, 13 ounces to win $500.

Pros are competing for a top award of up to $125,000 this week plus valuable points in the hope of qualifying for the 2014 Forrest Wood Cup presented by Walmart, the world championship of bass fishing. The top 35 anglers in the point standings from the six events on the 2014 Walmart FLW Tour will qualify. The 2014 Forrest Wood Cup will be in Columbia, S.C., Aug. 14-17 on Lake Murray and is hosted by Capital City Lake Murray Country. Anglers could win as much as $500,000 – professional bass-fishing’s richest prize.

Co-anglers are fishing for a top award of $25,000 this week plus valuable points that could help them qualify for the 2014 Forrest Wood Cup presented by Walmart. The top 35 co-anglers in the point standings from the six events on the 2014 Walmart FLW Tour will qualify.

Fans will also be treated to the FLW Expo at the Walmart on Saturday and Sunday from noon to 4 p.m. prior to the final weigh-ins. The Expo includes Ranger boat simulators, the opportunity to interact with professional anglers, enjoy interactive games, activities and giveaways provided by sponsors, and fans can learn more about the sport of fishing and other outdoor activities. All activities are free and open to the public. Also on Sunday, country music artist Josh Thompson will perform a free live concert on the Walmart weigh-in stage at 3 p.m.

Coverage of the Lake Hartwell tournament will be broadcast in high-definition (HD) on NBC Sports Network when “FLW” airs May 24 from 11 a.m.-12 p.m. ET. The Emmy-nominated "FLW" television show is hosted by Jason Harper and is broadcast to more than 564 million households worldwide, making it the most widely distributed weekly outdoors-sports television show in the world.

ABOUT FLW
FLW is the industry’s premier tournament-fishing organization, providing anglers of all skill levels the opportunity to compete for millions in prize money nationwide in 2014 over the course of 229 tournaments across five tournament circuits, four of which provide an avenue to the sport’s richest payday and most coveted championship trophy – the Forrest Wood Cup. FLW tournament fishing can be seen on the Emmy-nominated “FLW" television show and is broadcast to more than 564 million households worldwide, making it the most widely distributed weekly outdoors-sports television show in the world. FLW is committed to providing a lifestyle experience that is the “Best in Fishing, On and Off the Water.” For more information about FLW visit FLWOutdoors.com and look for FLW on Twitter, Facebook, Pinterest, Instagram and YouTube.