Manufacturers Profiting from the Internet of Things

New study shows manufacturers profiting from the IoT, and expect more to come 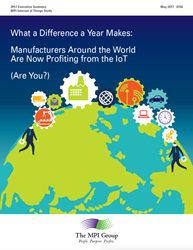 “Two years ago, MPI research showed that a significant percentage of manufacturers hadn’t even heard of the IoT,” says Brandt. “Now, it’s become a crucial weapon in manufacturers’ arsenals as they compete in a digital age.”

A new study shows that manufacturing executives around the world are seeing real effects on productivity and profitability from investing in the Internet of Things (IoT).

A year ago, two-thirds of executives surveyed had no strategy for implementing the IoT; now, the same proportion consider themselves IoT-competitive.

“There’s been a dramatic jump in awareness of, investment in, and profits from the IoT,” says John R. Brandt, CEO of The MPI Group, which conducted the study. “However, many smaller manufacturers are still unsure where to start.”

It’s crucial that these manufacturers catch up, says Brandt, or their competitors will gain an increasingly large share of the market.

MPI’s 2017 Internet of Things Study looked at the production of smart devices and the implementation of embedded intelligence within plants, processes, and products of manufacturers around the world. Key findings include both good news and bad:

“Two years ago, MPI research showed that a significant percentage of manufacturers hadn’t even heard of the IoT,” says Brandt. “Now, it’s become a crucial weapon in manufacturers’ arsenals as they compete in a digital age.”

The MPI Internet of Things Study was conducted by The MPI Group, and sponsored by BDO and SAS Institute Inc., in November and December 2016. 374 manufacturers participated in the study. An executive summary, Manufacturers Around the World Are Now Profiting from the IoT (Are You?) is available by contacting John Brandt at +1 216.991.8390 or by email at jbrandt(at)mpi-group.com.

About The MPI Group

The MPI Group (MPI) serves leaders with research, advice, and performance-target solutions that provide a competitive advantage in today’s fierce marketplace. MPI combines the disciplines of research, strategic advice, knowledge development, and hands-on leadership to create a difference — in performance, in profits, and in the people who make them possible.

In addition to the MPI Internet of Things Study, MPI has conducted the MPI Manufacturing Study for more than a decade — benchmarking research focused on manufacturing plant performances and best practices. MPI also conducts the Next Generation Manufacturing Study, an assessment of companywide capabilities to compete in the next decade, as well as myriad studies for clients on varied topics within numerous industries.

In late May, MPI will release a full report on the 2017 MPI Internet of Things Study. The in-depth report will examine all study findings in greater detail, including key cross-tabulations (e.g., comparisons of small-revenue companies vs. large revenue companies), as well as ways in which the IoT will impact business going forward. MPI CEO John Brandt offers presentations on the IoT study data, via webinars and in-person events. To learn more about the MPI Internet of Things Study Report, schedule an IoT presentation, or to find out more about other research conducted by MPI, contact: