Industrial Battery & Charger, Inc., headquartered in Charlotte, NC, celebrating its’ 40th year of providing motive and stationary power energy applications throughout the Southeast region, is proud to announce they are the recipient of the 2017 Douglas Battery Rep Of The Year Award. 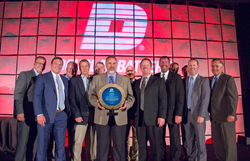 IBCI does so many things right, but first and foremost, they take care of their customer’s service needs.

Industrial Battery & Charger, Incorporated Vice President of Sales and Service, Jason Poston, announced that IBCI has earned the 2017 Douglas Battery® Representative of the Year Award. The award was presented to the IBCI team on June 24, 2017 at the Douglas Battery National Sales Meeting in Orlando, Florida.

The national award recognizes the representative who goes above and beyond in meeting criteria established by increasing sales over the previous year; meeting an overall sales target set for them at the first of the year; and supporting all products and programs that Douglas Battery offers as a company. Over 30 companies nationwide were in competition for the award. “We are extremely honored to have been chosen as the Douglas Battery Representative of the Year for fiscal year 2017,” said Poston. “Our associates continue to work hard every day to support our customers and the Douglas brand. To be recognized for that hard work is very rewarding.”

“As Douglas Battery’s oldest representative, IBCI has won this award multiple times, but it’s never a given that anyone will win the award just because of their size or how long they have been a rep of the company,” said Douglas Battery General Manager, Brian Faust. “IBCI does so many things right, but first and foremost, they take care of their customer’s service needs, which is hands down one of the most important things that we ask of our representatives. Not only do we require a company to sell our product, but they need to service it and that is something that IBCI does better than most,” said Faust. IBCI employs over 60 service technicians throughout North Carolina, South Carolina, Georgia, Virginia, Tennessee, Alabama and Florida, who are each certified to service all products in the Douglas Battery line.

The Douglas and IBCI relationship started over 30 years ago as two budding North Carolina businesses worked together to sell locally manufactured products and they worked hard together to convince customers of the benefits to buy locally. Both companies are founded on strong value morals and are committed to doing what is right for the customer, not always what is best for the bottom line. IBCI continues to represent Douglas products for two main reasons. First and foremost, Douglas has always provided a premium quality product. Second, IBCI receives a very high level of support from Douglas, which goes a long way in providing IBCI customers with the very best level of service possible.

IBCI is a privately held company that was built on, and continues to focus on, respecting its customers, employees and vendors as extended family members. The solid relationships that IBCI has built with their vendor partners over the past 40 years are based on honesty, integrity and mutual respect and are equally important to their success. “At the end of the day, we consider our vendor partners more than just that. We have developed friendships that will outlast the business. We take a lot of pride in that as well. People buy from people they like. It’s a pleasure to do business with Douglas Battery,” said Poston.

“Industrial Battery & Charger, Inc. (IBCI) was founded on the fundamental principle that providing a premium product at a competitive price, representing it with honesty and integrity and backing it with a commitment to customer satisfaction is the only way to serve our customers,” shared Poston. Over the past 40 years, IBCI has grown to the largest independent, family owned distributor of industrial batteries and chargers in the United States.

The founder of Industrial Battery & Charger, Inc., Terry K. Earnhardt, has over 49 years of experience in the industry, and still serves as President and CEO. His sons, Keith and Tim Earnhardt joined the company in 1992. The siblings learned the business from the ground up and currently serve as Secretary/Treasurer and Executive Vice President, respectively. Terry Earnhardt shared, “Service is what we built the business on.”

With 13 sales and service centers, Industrial Battery & Charger, Inc. is a dominant force in the motive and stationary battery and charger industry in Alabama, Florida, Georgia, North Carolina, South Carolina, Tennessee and Virginia. IBCI employs over 200 associates, with over 60 certified service technicians, and daily deploys over 75 mobile service vehicles. IBCI services all brands of motive and stationary power equipment. IBCI is a distributor for Enersys®, Douglas Battery®, BHS® and Battery Watering Technologies®.

Celebrating 40 years of providing motive and stationary power applications throughout the Southeast, IBCI will be hosting customer, vendor and employee appreciation events at each of the IBCI facility locations. The upcoming events include:

More information may be found on the Industrial Battery & Charger, Inc. website: http://www.ibcipower.com