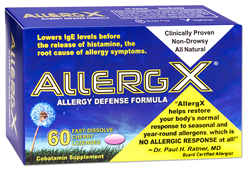 AllergX® is a natural, 100% non-drowsy lozenge that lowers IgE levels before the release of histamine, the root cause of allergy symptoms.

AllergX® Allergy Defense Formula, the world’s only “pre-histamine”, regulates the release of histamine before the onset of the allergic response or allergy symptoms.

Spring may bring smiles, but for allergy sufferers, spring flowers threaten to deliver another season of runny noses, nasal congestion and general ach…choo misery. According to the American Academy of Allergy, 50 million Americans suffers from seasonal or year-round allergies. Until now, allergy sufferers have had to choose between the suffering and their over-the-counter allergy medications causing drowsiness, nervousness or other unwanted side effects.

Enter the launch of AllergX® Allergy Defense Formula [pronounced al-ER-gex], an all-natural, non-drowsy alternative to OTC meds that has been clinically shown to restore a person’s normal immune response to allergens.

According to Board Certified allergists, allergies are not a normal state of health. An allergic reaction occurs in people with allergies - but not in non-allergic people - after they are exposed to harmless allergens, like pollens, grasses or pet dander. This reaction happens because allergic individuals over-produce the allergen antibody IgE which triggers the release of histamine. Histamine is linked to allergy symptoms such as sneezing, itchy eyes, runny nose and nasal congestion.

Board Certified Allergist and Immunologist Dr. Lyndon Mansfield, MD said: “IgE is one of the key antibodies that triggers the allergic response. Reducing IgE levels in your body, and keeping them low, reduces the chance of histamine and other allergy-provoking chemicals being released.”

“Allergies seem to worsen every year and OTC drugs aren’t always the best solution.” said Dr. Stanley Goldstein, MD, a Board-Certified specialist in adult and pediatric allergy, asthma and immunology, and pediatric pulmonology. “AllergX has been proven to work before the onset of allergy symptoms by targeting the root cause of allergies. In my opinion, a pre-histamine is a viable alternative.”

The primary ingredient in AllergX underwent extensive clinical studies on 2,500 allergy sufferers throughout the United States. Following a rigorous FDA-compliant study protocol, it was found that the AllergX formulation reduced IgE levels that are linked to allergy symptoms such as sneezing, nasal congestion and runny nose.

AllergX is the world’s only “pre-histamine”, which means it regulates the release of histamine before the onset of the allergic response or allergy symptoms.

AllergX is an all-natural formulation of three natural cobalamin analogues (in the vitamin B12 family) that are delivered in a carefully calculated ratio and dosage via cherry-flavored lozenges. FDA-approved clinical studies have shown that the main ingredient in this proprietary and patented formulation can restore the body’s normal response to seasonal and year-round allergens, which is no allergic response at all.

AllergX works by naturally regulating the over-production of the allergen antibody IgE (Immunoglobulin E), which in individuals with seasonal or year-round allergies is produced in higher quantities than the body requires for a normal functioning immune system. Allergic individuals have an easily-corrected imbalance in their immune system that overproduces IgE. Higher levels of IgE can lead to a hypersensitive response to harmless substances (such as pollen or pet dander) by triggering the release of histamines. When histamines are released into the body, they cause what individuals call their “allergy symptoms”. AllergX effectively lowers and regulates the over-production of IgE before the release of histamine.

“Everyone lives with pollen, pet dander and other allergens,” added Dr. Goldstein. “Yet some persons have adverse reactions. AllergX helps restore a normal response to harmless allergens, which is no allergic response”.

AllergX is available online at http://www.allergx.com or by searching AllergX on Amazon. Users in the above clinical study reported positive results within 2-4 weeks of taking AllergX as directed. AllergX is an all-natural, non-drowsy formula that is both gluten-free and vegetarian. There are no contraindications or known drug interactions. Study participants reported no adverse effects.

AllergX Allergy Defense Formula is a twice-daily, cherry-flavored, quick-dissolve lozenge that works prior to the release of histamines by lowering levels of Immunoglobulin (IgE, the key allergen antibody) which, in turn, can lessen allergy symptoms such as sneezing, nasal itch, runny nose and nasal congestion. AllergX has been clinically tested by U.S. Board Certified Allergists and has been shown to down-regulate the levels of IgE antibodies and to help restore a normal response to both seasonal and year-round allergens, which, according to renowned allergy researcher Dr. Paul H. Ratner, MD, is “no allergic response at all”. For best results, AllergX should be started prior to the beginning of allergy season, and continued daily throughout the season. AllergX is a proprietary, patented, all-natural, non-drowsy dietary supplement intended for use by adults and children 12 years of age and over. For company information visit http://www.exposurescientific.com.