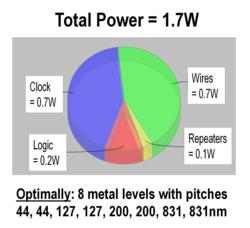 Sample output from IntSim v2.5 for a 1GHz chip

Zvi Or-Bach, President and CEO of MonolithIC 3D Inc., said, “We are delighted to serve the semiconductor community by providing enhanced versions of IntSim on an open-source basis. Response to the CAD tool has been highly encouraging. More than 500 technologists and designers have used IntSim thus far. Several university researchers are working with us to add features to IntSim.”

IntSim was originally developed as a 2D-IC simulator at Prof. James Meindl’s research group at the Georgia Institute of Technology in 2007. MonolithIC 3D Inc. extended the tool to 3D-ICs and released the next version of the simulator in early-2011. IntSim v2.5 adds a compelling new Graphical User Interface (GUI) to the franchise. Users can input technology, design and architecture parameters to the new GUI quickly and efficiently. Parameter values can be varied flexibility using a “sweep” function for optimization purposes. Various other features to improve ease-of-use have been added. Parthiv Mohan, Andrei Dalcu and Deepak Sekar implemented the features added in IntSim v2.5.

Dr. Muhannad Bakir, Associate Professor at the Georgia Institute of Technology and Associate Director of its Interconnect and Packaging Center said, “Our group explores design and technology related constraints for 3D electronic systems and are thrilled to see the development and release of IntSim v2.5, which is both intuitive and revealing.”

Optimization of clock frequency, interconnect stacks and transistor parameters is considered crucial to maximize performance and power benefits of scaling today. Intel, for example, has proprietary CAD tools that optimize interconnect stacks of their chips. In addition, high-profile changes of chip architecture were made in the last decade by companies such as Intel and IBM after the Pentium 4 and POWER 6 microprocessors, and power dissipation became a first order constraint. Sophisticated chip power predictions are now used to decide architectural quantities such as clock frequency and number of cores. A tool such as IntSim enables chip power prediction based on design choices and available transistor and interconnect technologies.

About MonolithIC 3D Inc.:
MonolithIC 3D Inc. is an Intellectual Property (IP) company dedicated to innovation in semiconductor design and fabrication. It invented and developed a practical path to the monolithic 3D Integrated Circuit, which includes multiple derivatives for Logic, Memory and Electro Optic devices. The company’s concepts have the potential to maintain or increase device speed and lower power requirements for a given node, while reducing the need for continuous (and very costly) dimensional scaling that has been the basis for “Moore’s Law”. MonolithIC 3D Inc. was recently selected as a finalist of the Best of Semicon West 2011, which recognizes the most important product and technology developments among the 746 exhibitors at Semicon West. More information about the company, including detailed technical information, can be found at its website.