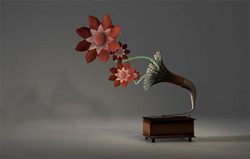 I chose CINEMA 3D as my 3D ‘weapon-of-choice’ and believe the software gave me the competitive edge to quickly create a quality, original concept that would excite people as well as allowed me to easily 'nail' the lighting before rendering.

The Cut&Paste Digital Design Tournament, now in its fourth year, is the leading live design competition that provides visibility and inspiration to established and aspiring designers while showcasing the creative process. From February to June 2009, Cut&Paste organizers conducted qualifying events in 16 cities worldwide -- Los Angeles, San Francisco, Portland, Boston, New York, Toronto, Chicago, Amsterdam, London, Berlin, Barcelona, Milan, Hong Kong, Shanghai, Tokyo, and Sydney -- resulting in 256 international competitors and 48 city semi finalists in the 2D, 3D, and Motion Design categories. According to Cut&Paste organizers, the events are punctuated, “…with the broad geographical reach of an Olympic event and the nervy psychological gamesmanship of the X Games…” taking the “…approach to design as spectator sport…like never before.”

At the Global Championship grand finale which took place in New York City on Friday, October 16, 2009, Smetzer competed onstage with 15 other semifinalists in a fast-paced environment and a tech setup that projected the creation process in real-time on large-scale displays in full view of an audience and a panel of judges. Each competitor was able to select the 3D program of their choice and asked to create an original design within a 20-minute period related to the themes of “Duality” and “My Instrument”.

Smetzer, who has used CINEMA 4D the past five years on a wide variety of artistic and corporate projects for clients such as NASA, Cisco, Nokia, etc., deployed the software at Cut&Paste 2009 and commented that having the right software tools was key to successfully bringing his concept to life from start-to-finish in the extremely limited timeframe.

“A good product design has a huge audience, but the designer rarely does. Cut&Paste changes all that. The first few minutes of the competition I was a little shaky competing against several other designers, a panel of judges watching over my shoulder, an audience of spectators, and cameras in my face. I soon started to warm up and relax as my concept started taking shape and I was able to let the creativity flow and focus on intensely pushing polygons around,” said Smetzer. “I chose CINEMA 3D as my 3D ‘weapon-of-choice’ and believe the software gave me the competitive edge to quickly create a quality, original concept that would excite people as well as allowed me to easily 'nail' the lighting before rendering. The NURBSs modeling, splines, deformers and the functions were awesome and helped me shape my images within minutes.”

For the “Duality” theme at the Global Championship event, Smetzer created a crow which he explains is a living symbol of the after-life in many cultures. The design included giving life to colorful flying cubes emanating from the bird’s open beak. For his “My Instrument” design, Smetzer created a phonograph with flowers growing out of the horn which he stated was a crowd pleaser and an idea everyone could relate to.

Smetzer adds, “Some of the 3D competitors really struggled with their renders. My final renders were full screen, included ambient occlusion and quality anti-aliasing and were finished in less than a minute on a duo core machine. I love using CINEMA 4D because it makes production fast and easy and there is no limit to what story I can tell.”

“The Cut&Paste Digital Design Tournament is one of the most prominent international showcases for artists on top of their game to create and share great design work under the most extreme circumstances,” said Paul Babb, president, MAXON US. “We congratulate Gabriel Smetzer for pushing artistic boundaries with his talent, stamina and focus and are pleased that our robust software tools played a central role in helping him take top honors in the 3D Design category.”

Smetzer first became acquainted with CINEMA 4D at a Berkeley, Calif. community college multimedia art program. As a self-described 3D generalist, he has tried other 3D software programs but has found CINEMA 4D especially lends itself to small studio environments as it is easy to learn and “makes sense” coming from an artist versus technical background. Smetzer continues to sharpen his 3D skills and knowledge of CINEMA 4D at Cineversity, MAXON’s 24/7 education and training resource site. Additional information on Gabriel Smetzer is available at Art & Design in Motion, http://www.gabrielsmetzer.com (website) and http://www.gabrielsmetzer.tumblr.com (blog).

MAXON Computer is a developer of professional 3D modeling, painting, animation and rendering solutions. Its award-winning CINEMA 4D and BodyPaint 3D software products have been used extensively to help create everything from stunning visual effects in top feature films, TV shows and commercials, cutting-edge game cinematics for AAA games, as well for medical illustration, architectural and industrial design applications. MAXON has offices in Germany, USA, United Kingdom, France and Japan. MAXON products are available directly from the Website and its worldwide distribution channel. Specially priced learning editions of the company’s software solutions are also made available to educational institutions. For additional information on MAXON visit http://www.maxon.net .