Industry leading retailer of aftermarket parts for off-roading, 4 Wheel Parts, has selected a new monthly winner through its Team 4 Wheel Parts website. Alex Chan of Oakland, California was awarded a $500 promo card for entering the drawing and showing off his rig. 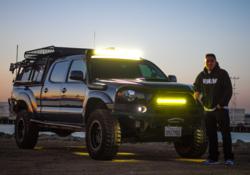 Alex Chan of Oakland, California was awarded a $500 promo card for entering the drawing and showing off his rig. His 2006 Toyota Tacoma was selected to be the Featured Vehicle for February.

4 Wheel Parts, prominent retailer and service provider of aftermarket parts for off-roaders, has named a new monthly winner through its Team 4 Wheel Parts website. Alex Chan of Oakland, California was awarded a $500 promo card for entering the drawing and showing off his rig. His 2006 Toyota Tacoma was selected to be the Featured Vehicle for February and is slated to appear in Off-Road Adventures Magazine.

Chan won in a drawing from among the hundreds of entrants who joined Team4WheelParts.com. Winners receive upgrades and parts for their vehicle and users enter by visiting the Team 4 Wheel Parts entry page and sharing their photos and videos. At the website, community members give and receive advice and display their 4x4s – trucks, Jeeps, and ATVs.

“After taking the truck off-road a few times, I started to see the direction I wanted to go,” says Alex. “I wanted to be able to go off-road and hit some decent trails, but also have the ability to drive across the country to explore. Certain parts aren’t available for the long bed Tacomas, so some items had to be custom made.”

Some upgrades and parts added to Chan’s Tacoma were:

After the build, Alex was eager to describe the truck’s improved performance. “With the addition of the ARB air locker, it can get through a lot of trails that it couldn’t before,” he says. “The King coilover shocks improved ride quality and performance and the ARB awning has come in very handy when out wheeling or at an event.”

Team 4 Wheel Parts is a collection of off-road experts headed by the company’s CEO & President Greg Adler. Brian Deegan and Robby Gordon are part of the team of racers who sell, own, and live the off-roading way of life. The King of the Hammers race, the effort to Save the Hammers, Operation Light Sabre, and Truck & Jeep Fests are among the events and causes the team is committed to. Additionally, Team 4 Wheel Parts sponsors Off-Road Adventures, a monthly online magazine for enthusiasts with content that features Product Reviews, Tech Tips, Buyer’s Guides and videos.

About 4 Wheel Parts: 4 Wheel Parts is a retailer and service provider specializing in aftermarket parts for off-road and 4x4 enthusiasts. With 59 locations nationwide, 4 Wheel Parts supplements its retail centers with a robust mail-order and e-commerce distribution network to serve customers around the country and around the world. 4 Wheel Parts carries a large inventory of truck and Jeep parts, including lift kits, mud flaps, tonneau covers and more.