"I have always felt that God wanted to use me to raise up a generation that - through signs, and wonders, and miracles - will prove to the world that Jesus is who He claims to be. I will continue to fulfill this charge through Ben Cerullo Crusades." - Ben Cerullo 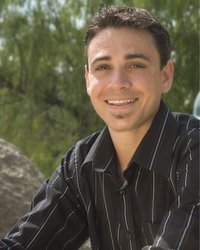 Ben Cerullo, President and Founder of Steelroots, today announced that he is adding to his leadership role with the youth-culture ministry Steelroots to conduct Ben Cerullo Crusades. The ministry will continue Cerullo's passion and commitment to bring the Gospel to not only young people, but people of all ages throughout the nations of the world.

"Steelroots was launched out of my passion to connect the Gospel to young people who felt that a relationship with God was unattainable," said Cerullo. "Since then, I have matured on many levels. Ben Cerullo Crusades is a reflection of where God is leading me personally and spiritually. While I will continue to serve young people through Ben Cerullo Crusades, my efforts also will focus on raising up a generation of all ages and backgrounds that will proclaim the Gospel with power to the world."

Named by Charisma Magazine as one of the "30 Emerging Voices" that will lead the church in the next decade, Cerullo used his action sports background to start Steelroots in 2000. The ministry was one of the first to blend action sports and Christian music to reach youth and young adults. Under Cerullo's leadership, Steelroots has grown to include: several television programs such as the flagship program "Steelroots - The Show" and the Christian Hip-Hop program "Mixx Master's Lounge"; an interactive website - http://www.steelroots.com ; national action sports and music events; and "The Revolution," a special program that focuses on equipping today's youth.

Although embarking on a new mission, Cerullo said that Steelroots, and its focus on bringing youth into a personal encounter with Christ, will not change. "We have a great team with a real heart for young people," said Cerullo. "Over the past few years, we have worked together to create a ministry that is making a real impact. Steelroots will continue to produce and develop the television franchises, web community support and interaction, events, and other projects that our supporters across the world have come to expect.

"I am excited to know that as I move into a new phase of my life with Ben Cerullo Crusades, Steelroots will continue to carry on the vision, of 'revealing the Truth to today's generation.' I plan to continue overseeing the mission and vision of Steelroots as God brings me into the next steps of my ministry."

In recent months, Cerullo stepped from in front of the cameras at Steelroots to minister to thousands of people with Christian leaders during crusades in Bogotá, Columbia; Maracaibo, Venezuela; Gabon, Africa; the Democratic Republic of Congo; Taipei, Taiwan; and Tabasco, Mexico. Cerullo is scheduled to appear at and lead additional ministry outreaches in the coming months, one being a September 2007 crusade in Lima, Peru.

Ben Cerullo Crusades was launched in 2007 as part of the expanding Inspiration Networks families of ministries by Ben Cerullo, founder of the youth-culture ministry, Steelroots. Under Cerullo's leadership, Steelroots developed into one of the leading ministries to use action sports and Christian music to reach youth and young adults. The growth and far-reaching impact of the ministry resulted in "Charisma" Magazine naming Cerullo as one of the "30 Emerging Voices" that will lead the church in the next decade. Ben Cerullo Crusades serves as another chapter in Cerullo's walk to raise up a generation that will walk in the purpose and power of God and show the world that Jesus is who He claims to be. For more information about Ben Cerullo Crusades visit http://www.bencerullo.com.