ActionCam by P.E.D. Products being one of the smallest action video/POV cameras on the market, combined with the new Stabilizer Bow Mount which utilizes the ActionCam's standard magnet mount, makes for a very compact HD video camera solution for Archers. 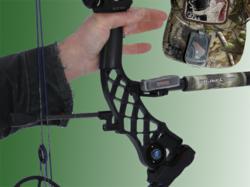 Who since being a child doesn't love the magic of magnets?

P.E.D. Products ActionCam is so small, (measuring 7/8 x 1 1/2 x 2 1/2in) and light weight, (weighing in at just over 1oz.) that one of the standard mounting methods is a magnet mount. It's the only action video camera on the market to utilize a magnet mount. All the other cameras are too big and bulky to be able to harness the ease and simplicity of magnets.

Magnets offer the user a simple, quick, secure mounting method. It's being employed from use in racecars, to hunters mounting the ActionCam to Bows, Guns and Hats. The Triped Magnet Mount is one of the (4) standard mounts included in the basic ActionCam package. It's triangular shaped base houses (3) Neodymium magnets. The triangular shape makes a perfect feature for quick, easy alignment. The ActionCam Hat & Bow mounts make use of just such a feature. The vee shaped receiver feature allows the user to virtually place the camera blindly and have confidence the the camera is point properly. The combination of the Hat mount and the Bow mount is becoming very popular with the hunters, as they have found that they can wear the ActionCam on their hat until they are ready to shoot, then they can quickly and easily transfer the ActionCam to the bow. They are now capturing exactly what they are shooting at. Originally many hunters felt that wearing a camera on their hat would be sufficient, until they realized that their hat is not pointing where they are aiming when in the prone shooting position.

The use of magnet mounts on racecars has also been proven to work at speeds of over 120mph. A thin rubber pad under the Triped mount stops the camera from slipping on the metal surface and also helps dampen against vibrations. Here is a link to a sample video. The ActionCam being so small, light weight and having such a small frontal area are the reasons we are able to harness the power and simplicity of magnets. Who since being a child doesn't love the magic of magnets?

And if the application doesn't provide a metal surface, such as a ski, fiberglass or plastic bodied car, then the simple application of an adhesive backed metal disk is all that's needed.

The ActionCam is an ultra small action video camera that produces high quality true HD 720P video. Small enough and rugged enough, it can be mounted almost anywhere; it's a fraction the size of it's competition and only weighs 1.2 ozs!! It allows the user to capture all your Action Videos, here are just a few of the applications people are using the ActionCam for; Car Racing, Motorcycle Racing, BMX Bikes, Cycling, Skiing, Hang Gliding, Hunting, Paint Ball, Fishing RC Cars & Boats, Rock Climbing, etc. It's the only ArcheryCam of this size. Visit our website to see why the ActionCam by P.E.D. Products has been adopted by the hunting community and racers alike.

ActionCam Mounting TechniquesInformation on how to mount the ActionCam