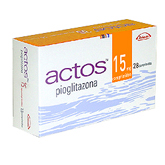 The resource center contains Actos warnings from both the FDA and European Medicines Agency who indicated that long-term use of the drug may be associated with an increased risk of bladder cancer.

The prescription drug resource center DrugRisk.com is alerting patients who have taken the drug Actos of updated legal news on the site. The resource site learned this week of new evidence showing the manufacturer may have known of the risks of bladder cancer in 2003, but did nothing to warn patients.

“The goal of DrugRisk is to improve consumer safety by publishing the latest drug warnings, recalls, studies and litigation news. Informed patients can discuss options with their doctor and decide if they need legal advice,” explains DrugRisk representative Ryan Mayer.

The resource center contains Actos warnings from both the FDA* and European Medicines Agency** who indicated that long-term use of the drug may be associated with an increased risk of bladder cancer. The drug has also been banned in France and Germany.***

In legal news, Takeda, the maker of Actos faces as many as 3,000 claims over Actos bladder cancer.**** More than 1,200 patients have filed an Actos lawsuit against the drug maker in a special multi-district federal court in Louisiana.***** Other cases have been filed in California.****

The first Actos trial began this month in California. Now, DrugRisk has learned that lawyers representing a man dying of cancer in that trial filed a study on January 25th which shows Takeda asked doctors in 2003 if they would still prescribe a diabetes drug that had bladder cancer risks. However, they didn’t disclose their concerns to patients.****

Lawyers are still helping those affected file claims. Anyone diagnosed with bladder cancer after taking Actos is urged to contact the DrugRisk Resource Center or speak with a lawyer about their legal rights as soon as possible.

Due to the specialized nature of defective drug injury cases, DrugRisk only recommends lawyers and law firms who have already handled Actos lawsuits.

For more information on the research, side effects, litigation news and a potential Actos recall or to speak with a lawyer, visit http://www.DrugRisk.com.