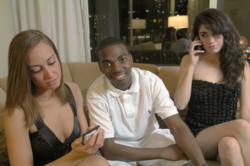 Get Your Tickets Now! We Are Waitng On Your Call.

Adero Neely, Chicago's teen singing sensation, is on the move. He started 2011 off with a bang as he joined Kool & The Gang by signing a record deal with Expat Records. Next, he was featured by Fuse On Demand TV as a block of his music videos premiered from December 2010 through February 2011. Music Choice gave Adero a lot of exposure by placing his song KnightCrawler in rotation. Additionally, If you plan to fly US Airways, just plug in your earphones and listen to Adero's songs on Satilite Radio on either its national and international flights with a potnetial of more than 600,000 listeners.

Adero is planning to shoot 3 new music videos for 3 of his album's singles this summer. His new album "KnightCrawler" is scheduled for release July 19, 2011; and hundreds of Chicago teens and suburbanites are planning to attend Adero's SixFlags Great America Album Release Party on Friday July 22, 2011. Adero also plans to host an 18 year old and over Birthday Bash the weekend of September 7, 2011. Adero will end the year with his Third Annual New Year's Eve Bash. While Adero is in the process of considering which shows he will perform in this summer, this 17 year old teen has his plate full as he auditions for featured films, commercials and prepares for college entrance exaimes.

For information and reservation regarding Adero's July 22, 2011 SixFlags Great America Event, contact 312-315-8241 or purchase tickets at paypal.com from vendor deneely1(at)gmail(dot)com