Companies now realize that aerosol cans can’t be thrown into the trash, but they still aren’t sure what to do with them. And of those who know that they need to be disposed of as hazardous waste, many don’t realize that there is a much “greener” and less expensive alternative. 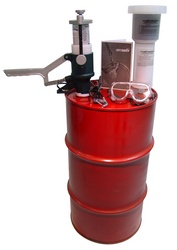 When businesses are aware of Aerosolv, they realize that it's a win-win for their bottom line and for the environment.

Michael Campbell, president of Katec, Inc., says that since he invented the Aerosolv technology, a system that safely disposes of RCRA-regulated aerosol cans, he has had to educate businesses about federal laws that prohibit casual disposal.

Thousands of businesses, including hair salons, factories, car servicing centers, shipyards, cruise ships and airlines, generate large numbers of aerosol cans. Until he invented the machine in 1991, businesses had no alternative but to pay the $2-per-can cost of disposing of them as hazardous waste. This involves collecting them in 55-gallon drums and burying them in approved landfills.

But with the $735-Aerosolv system, a drum holds the contents of 4,200 aerosol cans, saving $25,000 per drum. Both the cans and the chemical contents can be recycled and sold.

"It's a no-brainer," says Campbell. "When businesses are aware of Aerosolv, they realize that it's a win-win for their bottom line and for the environment." Campbell says demand has increased 30 percent per year in the past three years as the product's reputation has spread and the mandate for "green" solutions has increased.

Each pound of recycled steel saves 5,450 BTUs of energy in steel production. The average large user of Aerosolv recycles 1,000 cans per month, representing 250 pounds of scrap steel. There are more than 44,000 units in operation worldwide with a perfect safety record.

In 1999 Aerosolv came to the attention of the Department of the Navy and the state of California – which has the nation's most stringent environmental laws – resulting in certification in the joint U.S. EPA and California EPA Technology Verification and Certification Program. It is the only aerosol-can recycling system so certified.