AirInSpace, the leading supplier in the French market of mobile devices that capture and inactivate harmful and resistant biological particles from the air, announced today that it has received FDA clearance to market its PlasmairT2006 by AirInSpace mobile system as a medical device. The same remarkable technology that has been protecting astronauts aboard the International Space Station (ISS) since 2000 against harmful particulates and microbes is now defending a growing number of hospitals on earth, thanks to AirInSpace's technology. In October 2007, AirInSpace reported that it had closed an $8.5 million (EUR 6 million) Series "B" round of financing to fuel the Company's expansion into the United States. 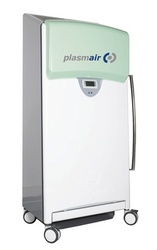 Toward that goal, we are extremely pleased that Wade Tetsuka has joined our management team. He has great experience in building a U.S. presence for emerging companies, and we expect him to be a significant force in establishing AirInSpace in the U.S. hospital market.

"We are extremely pleased that AirInSpace is permitted to introduce its mobile PlasmairT2006 by AirInSpace unit as an FDA-cleared medical device," said Laurent Fullana, CEO of AirInSpace. "This sets us apart from the masses of other mobile 'air cleaner' products in the hospital market that lack this 'medical device' designation. We have something that hospitals all over the world need and want--a mobile unit that catches and inactivates harmful microbes and is substantially more cost-effective than retrofitting hospital-building HVAC systems or even deploying less efficient mobile HEPA filter units that are not able to provide any level of germicidal efficacy."

"The healthcare industry is making a full-fledged assault upon combating infections in acute care hospitals," said Tetsuka. "AirInSpace already has placed this innovative and patented technology in more than 100 hospitals in France to effectively and safely manage air quality, and to help protect patients and staff from airborne pathogens."

"Now that we have our financial resources in place, we are moving very quickly to penetrate the U.S. market," added Laurent Fullana. "Toward that goal, we are extremely pleased that Wade Tetsuka has joined our management team. He has great experience in building a U.S. presence for emerging companies, and we expect him to be a significant force in establishing AirInSpace in the U.S. hospital market."

Previously, Mr. Tetsuka was President of WaveLight Inc., for whom he established U.S. headquarters and launched direct sales, marketing, field service and clinical support functions in the United States from 2003 to 2006. His responsibilities included the Allegretto Wave product, which captured a substantial share of the domestic LASIK/refractive surgical procedure market during this timeframe. WaveLight has subsequently been acquired by Alcon, Inc. He also has held executive management positions with Tutogen Medical (U.S.), Inc. and Acoustic Imaging Technologies Corp. (part of the Dornier Medical Group). Early in his career, Mr. Tetsuka was a Senior Manager for PriceWaterhouseCoopers. He holds a bachelor's degree in economics from The Wharton School, University of Pennsylvania.

The Company's flagship product is a mobile air-decontamination unit called PlasmairT2006 by AirInSpace. Its performance has been clinically proven to lower airborne biological loads and is now being used to combat nosocomial infection in high-risk areas of more than 100 hospitals and clinics throughout France, including hematology/oncology units and ICUs. The inactivation and germicidal effects of the plasma technology have been demonstrated even against one of the most resistant microorganisms: e.g., Bacillus atrophaeus spores (anthrax surrogate).

Separately, the Company announced that it will unveil a new product name for the PlasmairT2006 by AirInSpace for the U.S. market at the upcoming Association for Professionals in Infection Control (APIC) annual meeting to be held in Denver, Co., in June 2008. The rebranding is designed to help U.S. hospital sites improve patient and staff awareness concerning infection control.

Founded in 2002, AirInSpace offers an innovative range of products and services to address the need for microbial decontamination of air in hospitals and other environments. For more information, please visit http://www.airinspace.com, or contact the company at: mail@airinspace.com.