A new airport coffeehouse at LAX offers jet-setters an award-winning specialty coffee experience when they enter the gates of Terminal 7 at the Los Angeles International Airport. 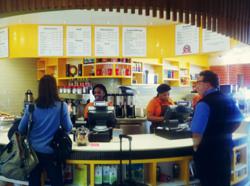 At LAX, we have a great staff and are featuring some fantastic coffee, great drinks, and wonderful food.- Heather Perry

Klatch Coffee, fresh off winning the competition to be named America's Best Coffeehouse, officially opened the doors to its airport coffeehouse at Los Angeles International Airport. In a movement by officials to improve quality at LAX, Klatch joins an elite lineup of Southern California eateries coming to the airport.

Located in Terminal 7, the new LAX location incorporates a modern, sophisticated look along with a fun, stylishly clean interior, creating an inviting and relaxing atmosphere for everyone to enjoy. Travelers to the airport coffeehouse are invited to experience the award-winning coffee and gourmet Panini sandwiches, salads and pastries at one of the many community tables ‘Where Coffee is the Conversation’.

According to Klatch Barista Champion Heather Perry, “The America's Best Coffeehouse competition is a huge honor and was a lot of fun because it was just like a real coffeehouse environment where we served real drinks to real customers." Heather added, "At LAX, we have a great staff and are featuring some fantastic coffee, great drinks, and wonderful food. I think those flying out of Terminal 7 are in for a real treat, and we even have people from other terminals walking the corridors to find us."

Klatch Coffee is an award-winning and renowned specialty coffee company and roaster in Southern California. Since 1993, Klatch has been searching around the world for the finest coffee, sourcing via a Direct Trade model and buying only the top 1% of beans available. Mike Perry, Roastmaster, blends a background in chemical engineering with a love for great coffee to balance science and artistry in achieving the perfect cup. Awards for Klatch include being named ‘Micro Coffee Roaster of the Year’ by Roast Magazine. In addition, Klatch's WBC espresso blend is the only espresso ever awarded "Best Espresso in the World" at the World Barista Championships. Coffee Review, the world's leading coffee guide, has awarded over 80% of Klatch coffees with a score of 90 points or above. Besides great coffee, Klatch is home to two-time United States Barista Champion Heather Perry who finished 2nd in the world and is the current Ultimate Barista.

To learn more about Klatch Coffee, the new airport coffeehouse, and/or to purchase Award-Winning Coffee, visit http://www.KlatchRoasting.com. Klatch Fans can find the latest and up-to-date news and discounts on Facebook @KlatchCoffee and Twitter @KlatchRoasting.