Alice In Chains, Ghost B.C. and Red Line Chemistry are three of the most anticipated forthcoming rock albums 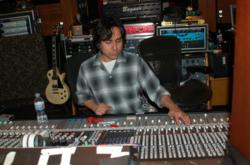 ‘Alice In Chains’ new release, ‘The Devil Put Dinosaurs Here’ was recorded at Henson Studios and is already impacting radio with their single “Hollow”. Their new single ‘Stone’ will be available March 26th, followed by the full release of their album on May 28th.

Fig engineered “Ghost B.C.” at Blackbird Studios in Nashville. The heavy metal group’s second album ‘Infestissumam’ has made an impression with their first release and video ‘Secular Haze’. Their album will be available April 9th.

Paul Fig has worked on albums by Rush, Deftones, Coheed and Cambria, Trivium, Evanescence, Death Angel, Despise You, The Mars Volta and many others. For more information about Paul Fig, contact Barbara(at)BWestMusic(dot)com