The 2013 MLB All Star Game and Home Run Derby will be held at Citi Field in Flushing, New York from July 14-16 and is likely to be the last NY Metropolitan area visit for the mid-summer classic for years to come. 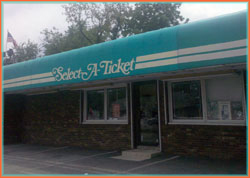 New Jersey ticket broker Select-A-Ticket is pleased to announce the availability of MLB All Star Game tickets for 2013. Major League Baseball's Opening Day is just a few weeks away and now is the time to start planning a summer vacation. A popular midsummer destination among baseball fans is the MLB All Star Game.

The 2013 version will be hosted by the New York Mets, taking place at Citi Field in New York. This marks the second time since 2009 the game has been held in New York as the 2009 game was at Yankee Stadium. Selectaticket.com currently has tickets to all the events of All Star Week. This includes tickets to the game, as well as tickets to the Home Run Derby and the Future Stars showcase on the Monday prior to the main event. While the game itself is exciting, the Home Run Derby has become a premiere event of the week.

The Home Run Derby has a great history in New York as who can forget the showcase Josh Hamilton put on during the All-Star Game at old Yankee Stadium in 2008. Hamilton crushed 28 homers in one round in an awe inspiring show. Prince Fielder won last season's Derby, edging out Jose Bautista 12-7 in the final round. The first Home Run Derby was held in 1985 and was won by Dave Parker, who hit just 6 total homers. The event has come a long way in its 20 plus years.

The All-Star Game itself is bound to be exciting again as 7 of the last 8 games have been decided by four runs or less. Home field advantage in the World Series is once again on the line and this is important because the NL has won the last three All-Star Games and a team from that league has won the title in each of the last three seasons. The last time the AL won the All Star Game was in 2009 and the Yankees went on to win the World Series.

The National League leads the all-time head-to-head record with the AL, 43-38. The American League won the 2008 contest in New York's Yankee Stadium 4-3 in 15 innings. The last time the Mets hosted the game was at Shea Stadium in 1964, a 7-4 win by the National League.

"With a couple of All-Star Games being hosted in New York over the last five years and so many new ballparks bidding to host the game, this will likely be the last opportunity for fans to attend the event in the Big Apple for quite a while", says Mark Gibbons of Select-A-Ticket.

That is a major reason for fans to obtain MLB All Star Game tickets well in advance because the experience is shaping up to be a once in a lifetime opportunity that fans won't want to miss.

About SelectATicket.com
Select-A-Ticket has been in business for over 35 years as an experienced, trusted and secure ticket broker.

Select-A-Ticket sells tickets to Broadway, Concerts, Sports, and Family Events and is a proud member of the National Association of Ticket Brokers (NATB).

For a complete list of available tickets, go to http://www.SelectATicket.com or call 800-735-3288 to order tickets by phone.