Global Islamic real estate consultancy Alpha1Estates International said on January 1, 2011, and in the new Islamic year of 1432 that the coming decade will usher in a maturing phase of the real estate sector of Makkah and Madinah, leading to a lucrative boom in the Holy Cities. 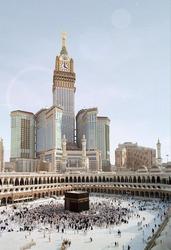 ‘As we enter the decade leading up to 2020 and 1440, the vision to transform the Holy Cities of Makkah and Madinah is being realised,' said Mr. Al-Alawi, Chairman of Alpha1Estates International, on the fifth anniversary of the company's global launch.

Alpha1Estates International, which launched to global acclaim five years ago on January 1, 2006, said that the past decade had been about laying the foundations of flagship projects and physical infrastructure, but the coming one would focus more on building non-physical infrastructure aimed at convenience - for the pilgrim (resident and visitor) and investor (domestic, regional and global).

'Alpha1Estates is immensely proud to celebrate its fifth anniversary today, marking more than half a decade of unparalleled global reputation and experience in marketing real estate projects in Makkah and Madinah,' said Mr Al-Alawi, Chairman of Alpha1Estates.

'Our focus, and that of all those involved in the real estate sector in the Holy Cities, should now be increasingly directed at bringing world-class infrastructure which will make it easier for Muslims to live, visit, invest and work in the Holy Cities.'

Alpha1Estates International's current flagship projects are Abraj a-Bait in Makkah and Al-Tilal Villas in Madinah, both allowing Muslims to reside and invest in the Holy Cities.

In January 2010, the company launched the Ihsan al-Haramain Index, the first index to solely track Saudi-listed companies involved in real estate development in Makkah and Madinah. The Ihsan al-Haramain Index reveals for the first time internationally that the real estate sector in the Holy Cities has suffered in 2010 due to a lack of mobilisation in non-physical infrastructure, which will change in 2011 and beyond.

'The Ihsan al-Haramain Index fell by 21 percent this year, affecting both Makkah and Madinah to the same degree, and underperforming by 6 percent the Tadawul (Saudi Stock Exchange) Real Estate Development Index which fell 15 percent this year,' said Mr. Al-Alawi. 'Be it the long-awaited Saudi mortgage law or certain regulations on investment in the Holy Cities, it is clear that we are now seeing the need for a vision beyond bricks, mortar and steel - and one which I am delighted to state is forthcoming.'

To commemorate the start of the new decade, the company also would be expanding its operations in 2011 through its own global offices, joint ventures, agency and franchise appointments.

'In 2010, we expanded our footprint in the Middle East, Asia-Pacific, Americas and Africa, both with our own localised operations as well as agency appointments,' said Mr. Al-Alawi. 'In 2011 and beyond, we look forward to extending our operations globally to meet demand.'

Over ten million Muslim pilgrims from 140 countries visit the Holy Cities annually for Hajj and Umrah, contributing 30 billion Saudi riyals ($8 billion) per year, the second-most lucrative source of the Kingdom's revenue after oil.

Alpha1Estates' reputation as the thought market leader on real estate investment in the Holy Cities was re-inforced in June 2010 when leading property firm Jones Lang LaSalle published a report on the sector with the headline 'Infrastructure key to increasing religious tourism in Saudi's Holy Cities', further stating that the sector was 'unique in the MENA (Middle East and North Africa) region in that they are constrained more by supply and capacity constraints and not demand (which is effectively unlimited).'

In January 2010, nearly half a year earlier, Alpha1Estates had publicly stated that investment in the real estate sector of the Holy Cities was 'based on inelastic and rising global demand from the world's billion and a half-plus Muslims, supported by significant public and private sector investment in infrastructure, both for the Grand Mosques and transport to them'.

In 2010, Alpha1Estates said there had been many milestones in the real estate sector in Makkah and Madinah. Most critical amongst these for heritage preservation has been the Saudi Commission for Tourism and Antiquities' (SCTA) decision to urban centres in Jabal Al-Noor and Jabal Al-Thawr. In the the real of real estate projects, there has been the completion of Abraj al-Bait, Makkah, including the completion of the tallest concrete building in the world, Makkah Clock Royal Tower.

In terms of transport infrastructure, not only has there been the first-phase completion of the 18km Makkah Metro railway, but Madinah has also enjoyed a boost with the Emirates, Gulf Air and Royal Jordanian initiating direct international flights.

'We are pleased to witness these milestones, including the completion of the Royal Clock Tower in Makkah in 2010, marking five years since we internationally launched the project,' said Mr. Al-Alawi. Alpha1Estates launched Abraj al-Bait, Makkah, in a global television presentation on December 25, 2005, which can be viewed on its channels on YouTube.com, Facebook , Twitter and Muxlim.

In the first half of 2011, two separate development organisations for the Holy Cities of Makkah and Madinah will be launched by the Makkah and Holy Sites Development Authority (MHSDA).

Mr. Al-Alawi said these latest developments from the public and private sector in the Holy Cities are promising.

'As we enter the decade leading up to 2020 and 1440, the vision to transform the Holy Cities is being realised.'

Makkah Clock at Abraj al-Bait, Makkah during the day (Alpha1Estates)