The first fresh look at the legacy of the Sixties and the war in Vietnam in more than 40 years. 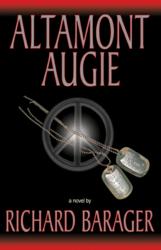 Richard Barager has written THE novel of the Sixties--a passion-filled, pitch-perfect, roller coaster of a tale about the decade that divides us all.

"Altamont Augie" by Richard Barager is a work of fiction that is both love story and homage to a generation of passionate, smart, challenging young Americans trying to understand a war that defied understanding. The author’s extensive and meticulous research underpins a novel that has the quality of a memoir. While the characters are purely imagined, brothers and sisters of the author’s childhood friends who were directly impacted by Vietnam became, in part, the basis for their development.

Forty years has washed away the intensity of the times, but what remains has recast the political landscape of today into a battle royal between liberal and conservative partisans. The roots of this schism—indeed, its true cause—stretch all the way back to the passions and violence that erupted between student activists of the sixties on the right and on the left, not a generation gap—a conflict between parents and children—but rather a peer gap.

"Altamont Augie" is the story of David Noble and Jackie Lundquist, college lovers who clash when he joins the marines in defiant rejection of the antiwar movement she embraces. To Jackie, the grinding war in Vietnam is a failure of national conscience; to David it is a failure of national honor. But their love endures, even while fighting on opposite sides of the defining issue of their time. Both their tumultuous affair and the Age of Aquarius itself cartwheel into the decade’s last great rock festival: Altamont, the metaphoric Death of the Sixties, where shame is ascendant and honor will wait thirty years for its due.

There are more than 78 million Baby Boomers alive today, born between 1946 and 1964, who have continued to influence every aspect of American life. It is in part their greatest contribution that they seek to constantly redefine the art of self-expression, first as a response to the war in Vietnam—both for and against—and from that time on by shaping the cultural, political and moral imperatives of succeeding generations.

Barager, in this complex and fascinating debut novel set against the backdrop of one of the most extraordinary times in the past 40 years, seeks to explore the meaning of patriotism, honor, virtue, love and ultimately loss in the Age of Aquarius--implicitly played forward to 2011.

For more information about Richard Barager and his book, visit http://www.richardbarager.com

To request a review copy of "Altamont Augie" or schedule an author interview, contact Gail M. Kearns at gail@topressandbeyond.com