Doctor Who Prescribes Novels to Patients Writes One of His Own

Evidence of bridges between literature and medicine abound, both in the form of physicians who have become famous writers—Keats, Chekhov, and Somerset Maugham—and in the form of famous novels about illness or physicians—"One Flew Over the Cuckoo’s Nest" and "The Death of Ivan Ilyich." 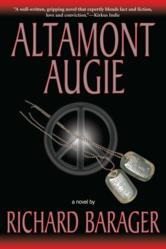 A startlingly vivid portrayal of one of the most colorful and turbulent periods in recent American history: the 1960s.

He is a champion of the healing power of literature, and from time to time prescribes specific novels to receptive patients and their families to help them cope with their burden of illness. Dr. Barager has engaged the medical community at large in this endeavor via The Literary Doctor, a blog category devoted to the use of literary fiction to help patients and physicians alike explore the meaning of human illness in a way scientific method cannot.

In mid-April, Dr. Barager’s debut novel, “Altamont Augie,” will be pre-released to the buying public. His son, a movie trailer editor in Los Angeles, created the powerful and moving book trailer for the forthcoming title.

“Altamont Augie” is a startlingly vivid portrayal of one of the most colorful and turbulent periods in recent American history: the 1960s, as seen through the eyes of David Noble and Jackie Lundquist, two ill-fated college lovers at odds over Vietnam.

Their story and the story of their generation spill onto a tableau of some of the era’s most iconic settings: the legendary battleground of Khe Sanh; a Midwestern campus riven by dissent; and Altamont speedway, scene of the notorious rock festival profiled in the film “Gimme Shelter.”

Barager, in this complex and fascinating debut novel set against the backdrop of one of the most extraordinary times in the past 50 years, seeks to explore the meaning of patriotism, honor, virtue, love and ultimately loss in the Age of Aquarius—implicitly played forward to 2011.

For more information about Richard Barager and his book, visit http://www.richardbarager.com.