New City Stage Company presents AMERICAN SLIGO by Pulitzer Prize nominated playwright Adam Rapp. The show is the fifth production of the 2012-13 season entitled "The New American Dysfunctional Family" and will be presented at the Adrienne Theatre, where New City Stage is in residence. 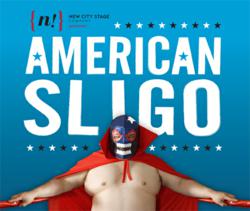 Dysfunctional families and misfits have always been a favorite of his, and with his dark comedy AMERICAN SLIGO, getting it's first regional production with new City Stage Company, playwright Adam Rapp does not disappoint.

New City Stage Company is thrilled to finish their successful 7th season with the regional premiere of Adam Rapp's play about the life of a professional wrestler -- AMERICAN SLIGO. The play takes place during the family dinner for Art "Crazy Train" Sligo on the day of his final match. The show is the 5th production of the 2012-13 season, entitled "The New American Dysfunctional Family." Previews begin May 30 and opening night is Saturday, June 1 at 8 PM. The show is being performed at the Adrienne Theatre in the Skybox. Tickets range from $10 to $35 and can be purchased on line here or by calling 215-563-7500.

This dark comedy received its initial production in 2007 at the Rattlesticks Theatre in the Greenwich Village section of New York City, which was also directed by the playwright. New City Stage is thrilled to present the first regional production, which is being directed by AARON CROMIE. Mr. Cromie is a commedia dell-arte and puppetry expert and has been a professional, director and musician in Philadelphia for 15 years. He was on the Barrymore Award-winning team in 2007 for Best Musical Direction for his work on "The Fantasticks" presented by Mum Puppettheatre.

ADAM RAPP is an American novelist, playwright, screenwriter, musician and film director. His play "Red Light Winter" was a Pulitzer Prize finalist in 2006. The majority of Rapp's plays feature small casts and are set in small spaces. Many characters in his plays are lower-class Americans. His work often combine stories of Midwestern longing with the idea of finding escape in New York. He is known for combining humor with gloom, preferring dark themes. Rapp has said that his ideas for characters and stories come to him most often while playing basketball or walking the streets of New York. He is interested in the rhythm and language that he hears while listening to conversations and voices.

In a conversation with fellow playwright Gina Gionfriddo published in The Brooklyn Rail, Rapp says: "When you see something powerfully acted on stage, it hits a nerve in the way music hits a nerve … Watching someone twelve feet from you falling in love or being abused … There’s something raw about that experience that you don’t get from film or TV."

ABOUT THE PLAY
A darkly humorous saga about the quintessential working class American family. On the eve of his final fight, all-star wrestling legend Art "Crazy Train" Sligo, his two slacker sons, his colorful sister-in-law and his biggest fan gather for a very unusual last supper. Of course, a few unexpected guests arrive, sparks fly, and things just can't seem to stop going wrong in this home... This play is a wild ride that stirs up a heady brew of gritty realism stuffed with the twisted values of the Sligo household.

"In American Sligo, his latest attack on the moral values and social conventions that define the American way of life.... Rapp hits his stride in the razor-cut pieces of dialogue..."— Variety

"This production is a powerfully satiric look at the dark underbelly of America." — Theater Mania

The award-winning cast will be announced in April.

ABOUT NEW CITY STAGE COMPANY:
New City Stage Company, founded in 2006, is dedicated to presenting high quality professional theatre that engages audiences on a variety of levels; not only entertaining them but also encouraging awareness of issues relevant to the community. We draw our season from contemporary and classical works, with a special focus on including Philadelphia premieres from local playwrights, and form storytellers whose work is not normally found in the region.