With 1.3 million Android devices being activated each day, and over 500 million total devices, there is a large and rapidly growing audience for new Android apps. Andromo App Maker for Android takes a no-coding approach to app development, allowing anyone to create an Android app and get in on the profitable Android app market. 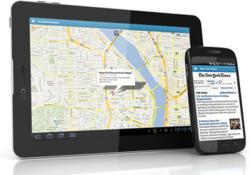 Our users are always telling us how much they love Andromo’s ease-of-use, and the variety of apps they’re able to make. Basically, if you have an idea, Andromo can help you turn it into an app.

Just six months into Andromo 2.0’s official release, 169,873 users have signed up to make their own custom Android apps at http://www.andromo.com. Andromo is an online web service for creating Android apps without programming. 145,046 apps are currently under development by Andromo users with over 12,000 apps already available in the Google Play app store.

Using Andromo’s visual interface, anyone can build an Android app in minutes by choosing from a list of popular activities. Developers can include interactive maps, Twitter feeds, Facebook pages, photo galleries, soundboards, SHOUTcast Radio and Podcasts, PDF/E-Book Viewers and more in their custom apps. By mixing and matching activities, Andromo users can build a huge variety of custom apps, such as apps promoting businesses, fan apps, e-books, news and radio apps, and more.

Andromo users are generating revenue from their apps in a variety of ways. Thousands of Andromo-built apps are available for sale in Google Play, with millions of installs to date. Both large and small businesses can distribute apps to increase customer awareness, or to promote sales and events. Developers can build apps for clients using Andromo and charge consulting fees. Even free apps can make money for the designer by linking to an AdMob account.

“Our users are always telling us how much they love Andromo’s ease-of-use, and the variety of apps they’re able to make,” says Indigo Rose Software President Colin Adams. “Andromo users have made store locators, DIY e-books, travel guides, community club apps, and lots of others. Basically, if you have an idea, Andromo can help you turn it into an app.”

Since its launch, Andromo has added to its list of available app activities in response to popular customer requests. The latest features include PDF/E-Book Viewers, Podcast and SHOUTcast radio features, and the integration of AirBop’s GCM push messaging platform.

To start making Android apps, interested developers can subscribe to Andromo at http://www.andromo.com for $25/month or $129/year.

About Andromo App Maker for Android