Unexpectedly addictive matching game can be downloaded for free from Google Play. 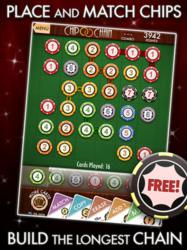 Our goal for Chip Chain was to make a highly-polished puzzle game that was very easy to learn but had enough depth to keep experienced gamers playing for hours. Hearing all the great compliments from users of all ages shows that we succeeded.

AppAbove Games, a developer and publisher of bestselling mobile games, has released their fan-favorite, free-to-play matching game Chip Chain for Android phones and tablets. The Android version joins a well-received iPhone / iPad version that has been played a whopping 6.5M times by iOS users around the globe since its November 2012 debut. Android users can join in the fun by downloading Chip Chain for free from Google Play: https://play.google.com/store/apps/details?id=com.appabovegames.chipchain

Chip Chain may look like a basic match-3 game—but looks can be deceiving! The gameplay starts out familiar: simply place three or more chips of the same value next to each other to create a chain and earn a new chip with a higher value. But Chip Chain quickly evolves from a simple matching game to an addictive, strategic puzzler thanks to four game modes, cards that can be played to move chips or change their values, and a dealer who tosses down his own chips to get in the way. Players can make mega-chains for a higher score, find ways to use the dealer’s chips to their advantage, and stay in the game as long as they can.

This more-than-meets-the-eye matching game has already been downloaded by more than 160,000 players and has maintained an average 4.5-star App Store rating. Chip Chain reviews have also been favorable, with gaming site Polygon calling it “simple, elegant and full of strategy.” GamesRadar noted that Chip Chain “mashes up match-3 puzzles with poker aesthetics in an inventive way that’s highly addictive” and Joystiq concluded that Chip Chain’s “stylish design makes it easy to pick up, but the game’s deep mechanics make it hard to master.”

“Our goal for Chip Chain was to make a highly-polished puzzle game that was very easy to learn but had enough depth to keep experienced gamers playing for hours. Hearing all the great compliments from users of all ages shows that we succeeded,” says Aaron Isaksen, Chip Chain’s lead designer and cofounder of AppAbove Games. “Now we are very excited share this game with the ever expanding group of people with Android tablets and phones.”

About AppAbove Games
AppAbove Games LLC was founded in 2003 to develop and publish original high-quality mobile games that appeal to a broad audience. Cofounders John Bizzarro and Aaron Isaksen have helped AppAbove Games become a profitable business with 9 titles distributed in more than 50 countries, including such bestselling games as Jail Trail, Cadena de Presos, and Armadillo Gold Rush. Additionally, AppAbove Games is an Indie Fund partner (http://indie-fund.com). To learn more about AppAbove Games, visit the company’s website at http://www.appabovegames.com.