Yeloworld is a startup launched in January 2013 with the objective to end the rip-off that mobile users endure from mobile network operators whenever they make international calls or are traveling abroad and roaming - and as a result do to calling what WhatsApp did to SMS. 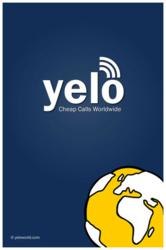 Yeloworld is a startup launched in January 2013 with the objective to end the rip-off that mobile users endure from mobile network operators whenever they make international calls or are traveling abroad and roaming - and as a result do to calling what WhatsApp did to SMS.

The idea came from the belief that money should be spent in far more meaningful ways than paying a phone bill. The founders are three serial Tech entrepreneurs, who have been involved with mobile and Internet technologies for most of their careers and have extended experience in running startup companies, managing projects and leading large groups of people, so they decided to tackle the issue and came up with an efficient, low-cost and interesting way to make cheap calls worldwide.

In technical terms, Yeloworld is an OTT calling service using VoIP (Voice over Internet) to initiate the calls and terminating the calls directly on the carrier networks in over 200 countries.
In simpler terms, Yeloworld is an app for iOS (iPhone, iPad, iPod Touch) and Android phones/tablets that allows users to make very cheap phone calls to any mobile or landline numbers, anywhere in the world, and save a lot of money on international calls.

Yeloworld allows users to call regular phone numbers. This means that the receiving party doesn’t need to own a smartphone, install any app whatsoever or even be online to receive the call, just a regular telephone. Yeloworld allows everyone to call anyone, anywhere, on their “normal” phone (cellphone or fixed landline), regardless of where they are and what type of phone they have.

The apps for iPhone, iPad, iPod Touch and Android are the first set of apps, but to take Yeloworld to the next level, the company now needs funding to rollout more apps to more platforms (BlackBerry, Windows Mobile and even Web Apps), add more features (SMS and more) and ultimately create new jobs.

Yeloworld has started a crowdfunding campaign to help them reach their potential to help millions of smartphone users around the world save billions of dollars on their phone bills and make a significant impact in the way people communicate in a modern, digitally borderless world.

About Yeloworld
Yeloworld is an early stage technology startup founded by a team of seasoned technology entrepreneurs with a track record of successful companies in Hong Kong and The Netherlands.
Yeloworld is a cross pla?orm mobile calling app, which allows users to call landlines and mobile phones globally, at extremely low rates. Yeloworld is currently available for iOS and Android.