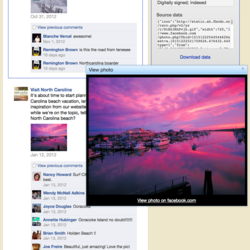 For the first time ever, we can capture the full context of social media as it happens, and make the records almost instantly available to the general public.

The State Archives of North Carolina, on Tuesday, unveiled a first-of-its-kind social media archive to an audience of leading archivists, librarians, and records managers at the Best Practices Exchange Conference in Annapolis. The interactive social media archive is available to the public at http://nc.gov.archivesocial.com and contains more than 55,000 public records of Facebook and Twitter communications from state agencies across North Carolina.

North Carolina’s effort to archive social media records is driven, in part, by the need for governments to comply with “freedom of information” and state-level public records laws. The archive is launching in beta with a pilot group of state agencies, and is expected to encompass more than 130 agency social media sites over time. Although North Carolina has previously experimented with webpage archiving technology, this new technology demonstrates a significant advancement in the ability to retain and produce social media records. As Kelly Eubank, Head of Electronic Records for the North Carolina State Archives, explains, “For the first time ever, we can capture the full context of social media as it happens, and make the records almost instantly available to the general public.”

North Carolina’s social media archive was developed by ArchiveSocial, a company that specializes in social media record keeping for government, regulated industries, and the enterprise. ArchiveSocial CEO, Anil Chawla, emphasized the significance of the joint effort by saying, “We believe that this is the world’s first truly interactive social media archive, made entirely available for citizens to search and download records. Kelly and her team are often recognized as thought leaders in this space, and it is tremendously meaningful to see them adopt our technology.”

Perhaps most striking is the ability of the archive to display content in a manner that mimics the original social network. Visitors can expand comments on a Facebook post, view full-sized photos, explore hashtags, and more. “Preserving the native look and interactivity of social media is critical given how rich, dynamic, and varied the content can be. As a records manager, you have to think about how you will make sense of this data years later,” explains Chawla. Furthermore, social media records are captured continuously throughout the day and are archived in a legally sound format. In other words, every tweet, Facebook comment, and photo in the archive can potentially serve as legal evidence. “It is very important to us, from both an e-discovery and digital preservation standpoint, that ArchiveSocial can capture social media in its native format with complete metadata”, says Eubank.

Chawla believes that the North Carolina social media archive serves as an important example of how governments can satisfy legacy requirements, while being forward thinking in their approach to social media. “Every level of government is currently struggling with record retention of social media, but this archive clearly demonstrates what is possible.” He also emphasizes that the effort to retain social media records is not only about government transparency and compliance with records laws. “It is also, in many ways, about preservation of society and culture. It provides an incredible historical record of how we as citizens interact with our fellow neighbors, and our government.”

ArchiveSocial provides an industry-leading social media archiving solution for government, regulated industries, and the enterprise. It automates business-grade record keeping of social networks including Facebook, Twitter, and LinkedIn. ArchiveSocial is designed specifically for legal and compliance needs, and provides the most authentic capture of social media available. For more information, visit archivesocial.com.