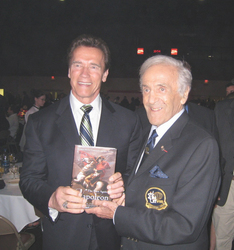 Napoleon's desire to spread 'liberty, fraternity and equality' to all citizens of France, and then to all citizens of countries that were occupied by the French Army, is what gained my respect and interest in Napoleon and the period in which he lived

California Governor Arnold Schwarzenegger and Ben Weider met at the Arnold Schwarzenegger Bodybuilding Classic in Columbus, OH, where the Governor held up a copy of Weider's newly published book, The Wars Against Napoleon: Debunking the Myth of the Napoleonic Wars, by authors General Michel Franceschi and Ben Weider and published by Savas Beatie LLC.

Governor Schwarzenegger organizes yearly the Arnold Schwarzenegger Bodybuilding Classic. Every year he selects an outstanding individual and honors him for his contribution to health, fitness, and bodybuilding.

Governor Schwarzenegger presented Weider with The Lifetime Achievement Award in front of 5,000 cheering fans. When asked about his opinion of Governor Schwarzenegger, Ben Weider replied, "Arnold Schwarzenegger is indeed one of the most intelligent people I have ever met. His perseverance, charming personality, and ability to solve problems and achieve results are what make him an outstanding individual."

Governor Schwarzenegger is also interested in history and was pleased when Ben Weider, a Napoleonic historian, signed a copy of his new book entitled The Wars Against Napoleon: Debunking the Myth of the Napoleonic Wars.

"I have read The Wars Against Napoleon, and I liked it," announced Governor Schwarzenegger.

Popular and scholarly history presents a one-dimensional image of Napoleon as an inveterate instigator of war who repeatedly sought large scale military conquests. General Franceschi and Weider dismantle this false conclusion in The Wars Against Napoleon. Publishers Weekly called the book "Provocative . . . revisionist . . . and controversial." According to Library Journal, "The authors argue strongly, persuasively, and intellectually for what is, essentially, the other side of the usual story. They will surely provoke debate within the historical community wherever there is interest in this period. Recommended for all libraries adding to their Napoleonic collections."

Weider explains that his and Franceschi's long persuasive essay turns our understanding of the French emperor on its head. "Napoleon's desire to spread 'liberty, fraternity and equality' to all citizens of France, and then to all citizens of countries that were occupied by the French Army, is what gained my respect and interest in Napoleon and the period in which he lived," explained Weider.

NOTE: IF USED, GOVERNOR ARNOLD SCHWARZENEGGER'S QUOTATION CANNOT BE ALTERED OR EDITED IN ANY MANNER.

About The Wars Against Napoleon authors General Michel Franceschi and Ben Weider:

General Michel Franceschi began his military career in 1951 at the officer's school at Saint-Cyr and concluded it in 1990 in the rank of Général de Corps Armée (General of Corps). General Franceschi's profession encouraged the study of military history. A Special Historical Consultant to the International Napoleonic Society, General Franceschi is the author of Democracy Massacred: Witness in New Caledonia (1998) and Corsica: The Voice of the Silent Majority (2001).

Doctor Ben Weider, a businessman of world-wide stature, built an industrial empire at the head of the International Federation of Body Building, which he founded and over which he presided for decades. Dr. Weider is the author of many published works translated into forty languages, including The Murder of Napoleon (1986, 1999), with David Hapgood, which provided scientific proof of the poisoning of the Emperor at Saint Helena. Dr. Weider founded in 1995 The International Napoleonic Society (INS), a non-profit association based in Montreal. France awarded Dr. Weider the distinction of chevalier of the Legion of Honor in 2002.