After opening his highly anticipated, first US solo-show this month at the Fifty24SF Gallery, acclaimed muralist ARYZ begins his latest large-scale mural in San Francisco to mark the occasion. 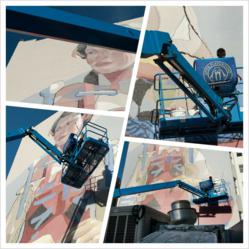 In Progress: New mural in San Francisco by ARYZ

As a muralist, ARYZ is regarded by some as a transformative figure in contemporary muralism... Many of his fans in San Francisco and abroad, highly anticipate what this finished mural will look like once it is completed this week.

Barcelona-based artist and famed muralist, ARYZ began work on his latest large-scale mural in San Francisco over the weekend. The wall located in the Tenderloin district, will feature a striking portrait of a woman drafted in ARYZ’s signature style. The new mural due to be finished this week is sponsored and co-organized by local support from Fifty24SF Gallery, WallSpaceSF and Upper Playground.

ARYZ, arrived in San Francisco earlier this month to open his highly anticipated, first solo show in the United States: STYLE IS THE LIMIT. The show at Fifty24SF Gallery opened on April 19th with a new body of work featuring studies, canvases and a sculpture that ARYZ has been working on between his murals across the world. The show will remain open until May 31st.

As a muralist, ARYZ is regarded by some as a transformative figure in contemporary muralism. He has been described as an artist who has taken on heavy-metal-influenced illustration and a tradition of European street art by combining them both into his own style of public art. He has achieved widespread acclaim in recent years, due in part to his artwork being featured on Aesop Rock’s recent album “Skelethon” and a recent January 2013 cover and editorial feature in Juxtapoz magazine. But his well-received murals around the world speak for themselves and to the testament of this young artist’s talent and unique vision. Many of his fans in San Francisco and abroad highly anticipate what this finished mural will look like once it is completed this week. The latest news and updates about the mural will continue to post at http://news.upperplayground.com/news/aryz-mural-in-sanfrancisco.

WallSpaceSF – Established in 2008 by Chris Shaher, WallSpaceSF connects local and international artists with exclusive urban canvases. Through building community relationships and sourcing strategic platforms for artists to present their work, our goal is to enrich public spaces through innovative, contemporary works of art.