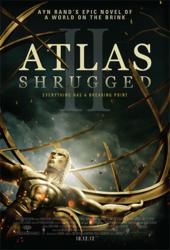 Based on Ayn Rand’s (Feb. 2 1905 - Mar. 6 1982) 1957 novel, ATLAS SHRUGGED PART II is set in a near future dystopian USA with a global economy on the brink of collapse - unemployment at 24% and gas at $42 per gallon - and brilliant creators, from artists to industrialists, continuing to mysteriously disappear at the hands of the unknown.

“Being an independent film, reaching 100,000 Facebook fans is a huge milestone for us. Community support around the film has been tremendous.” said Atlas Productions’ Chief Technology Officer Scott DeSapio.

“With the recent nomination of Paul Ryan, Ayn Rand’s name has been more and more in the spotlight recently. We’re very happy to see Ayn Rand’s ideas finally making their way to the mainstream.” commented Harmon Kaslow, Producer of Atlas Shrugged Part II.

“For those that have read the book, while Atlas Shrugged Part II the movie may not be the movie that’s been playing in everyone’s head since closing the back cover, it is without question a celebration of Ayn Rand’s ideas - and that’s what has everyone most excited.” continued Kaslow.

With the recent release of the film’s trailer on YouTube (http://youtu.be/AF9QT43uDQU?hd=1), Atlas Shrugged Part 2 continues to pick up steam as it heads to theaters nationwide October 12th. For more information, visit the movie’s official web site at http://www.AtlasShruggedMovie.com or the film's official Facebook page at http://facebook.com/AtlasShruggedMovie.