Author Sharon Hedrick’s new book “Unbridled Forgiveness” is a dramatic tale of love, faith, and the nightmare of physical and mental abuse at the hands of a parent.

Recent release “Unbridled Forgiveness” from Page Publishing author Sharon Hedrick is a gripping and potent work of dramatic fiction following the life of a family held captive by an evil and violent patriarch. Can Joanne ever obey God’s command to forgive the murder of her beloved husband? 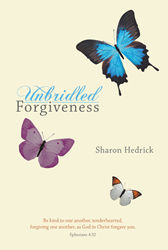 Sharon Hedrick, a mother and grandmother currently residing in Virginia with Joey, her husband of over thirty-four years, has published her latest book “Unbridled Forgiveness”: a poignant novel inspired by her own childhood with an abusive father.

Sharon writes, “’Unbridled Forgiveness’ is a story about the effects abuse can have on a family yet how we as Christians must learn to forgive even what seems most unforgiveable. Like many mornings, Joanne Liggins would awake to find that the love of her life was no longer by her side. She wondered how she could ever be happy again. She and Kenneth had vaguely known each other until attending a party of a mutual friend. From that night on, they quickly fell in love and, once graduating from high school, were married. Soon they had a beautiful baby girl, Bella. Yet now because of one tragic night, Joanne’s life seemed over. Her mother, Marcy, had taken over most responsibilities in taking care of young Bella, hoping that someday Joanne would find it in her heart to forgive the madman responsible for all her pain.

Marcy and Bill Liggins married young, and from the first day of their life together as husband and wife, Marcy knew this would be no fairy-tale marriage. Prior to their wedding day, Marcy was pursuing her passion and dream of becoming a registered nurse. Bill robbed her of that dream and made sure her life slowly moved toward becoming a nightmare.

Each of her four children, Devin, Joanne, Rick, and Fran, had suffered in some way throughout the many years of physical and mental abuse brought on by this madman. Someone who should have loved and protected his family seemed to thrive more and more each year in abusing them.

Marcy escaped the place she had tried so hard to make a happy home once, only to find herself drawn back in by the deceit and promises that Bill would never keep. It wouldn’t be long before she would see just how much evil her husband enveloped. Soon she would escape him forever, yet at a cost. Kenneth, her loving son-in-law, would lose his life. Anyone that knew Kenneth had been certain that he would do it all over again to save the life of Marcy and her children. He had laid down his life so that others could live and, in doing so, set the Liggins family free. No longer could Bill inflict the abuse as he had done for so many years on his family. Prison would now be his home, a place from where he would seek forgiveness of all the horrible things he had done while living in freedom.

The Liggins were each day by day putting their lives back together. Dreams were beginning to take form. Happiness was replacing their once sullen and fearful hearts. It appeared now that because of the heroic actions of their beloved Kenneth, true love could once again become a possibility. Some had forgiven Bill for the atrocities put on their lives; others had not. Only when we fill our hearts completely with the love of Christ, seeing others the way he sees them, are we able to manifest unbridled forgiveness.”

Published by Page Publishing, Sharon Hedrick’s engrossing book is a spellbinding tale of perseverance and faith.

Readers who wish to experience this work can purchase “Unbridled Forgiveness” at bookstores everywhere, or online at the Apple iTunes store, Amazon, Google Play, or Barnes and Noble.