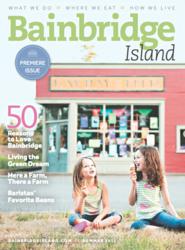 Bainbridge Island magazine will celebrate the lifestyle of the island – its heritage, its fascinating people, its beautiful homes and gardens, its arts and artists, its restaurants old and new, and much more.

An elegant new magazine focused on the best aspects of living on Bainbridge Island makes its debut at the end of this month. The quarterly publication will arrive free in the mailbox of every local residence and business.

“Bainbridge Island magazine will celebrate the lifestyle of the island – its heritage, its fascinating people, its beautiful homes and gardens, its arts and artists, its restaurants old and new, and much more,” according to Michael Cyger, publisher of the magazine and an island resident.

The premiere summer issue includes articles on 50 reasons to love Bainbridge, an inside look at an award-winning green home, a visit to the island’s Farmers’ Market, and a chat with several island baristas about their favorite coffee drinks.

“We are sure residents will find the magazine engaging, but we also want their out-of-town family and friends, as well as tourists, to see why we choose to live in such a special place,” said Vicki Wilson, the magazine’s editor. The publication is written, photographed and edited entirely by Bainbridge Islanders.

Cyger and his wife, Erin, developed the magazine’s concept and will direct its overall operation. Both have previous magazine experience. Michael was the creative force behind a business website and print magazine and Erin served as that magazine’s editor-in-chief, as she does with Bainbridge Island magazine. The couple moved their family to the island eight years ago when they decided to relocate back to the West Coast after living in the East.

Cyger also publishes BainbridgeIsland.com, a colorful online guide to the island that provides thousands of pages of content on virtually every island institution and event. “But residents, businesses and tourism groups can also benefit from a well-designed print medium that showcases all the good things about Bainbridge Island,” Cyger said.

The magazine will have a minimum circulation of about 10,000 – the number of residences and businesses that will continue to be mailed free copies. In addition, paid subscriptions will be available. Individual copies of the magazine can be purchased at the Bainbridge Island Chamber of Commerce, Eagle Harbor Book Co. and other interested retailers. Additional distribution is planned through real estate offices, and hotel and cruise ship concierges. The magazine’s primary support will come from advertising.

Wilson said Bainbridge Island magazine will regularly feature house and garden tours, profiles of interesting islanders, explorations of the arts, details of island events, guides to good dining, visions of local style and fashion, and a variety of insider knowledge.

Wilson has lived on the island since 2007. She has written and edited for various publications, from a PTO newsletter to the Washington Post. Since moving to the island, she has embraced her new hometown by serving on the board of the high school Parent-Teacher-Student Organization, competing in the Bainbridge triathlon and threading the movie projector at the historic Lynwood Theatre.

The magazine staff consists of a cadre of freelance contributors who also call the island their home. “We have some great writers and photographers supplying content,” Wilson said. “But we’re always looking for more.” She suggested that anyone interested visit http://www.bainbridgeisland.com/apply-magazine.