EnvisageChange.com Reveals 'Optical Obama' - An Optical Illusion to Encourage Science, Art and Change for the Better

President-Elect Barack Obama appears in a new light - as an optical illusion based on the art and science of afterimages. The Envisage Change team created the image as a metaphor to promote discussion about ways to spotlight science, art and the benefits of change in our lives. 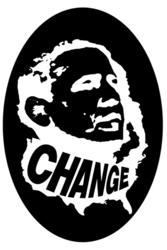 The EnvisageChange.com team today released an artistic optical illusion featuring President-Elect Barack Obama. Aiming to spark lively discussion about the nature and necessity of change in many aspects of our lives, the optical illusion is an allegory about the importance of taking action.

Samuel Berger, MD, founder of http://www.EnvisageChange.com, commissioned an original image designed to stimulate interest in both science and the arts. Viewers stare at the white dot in the center of the image for around 30 seconds, close their eyes and wait for the fleeting afterimage of President-Elect Obama to appear.

According to Dr Berger, MD (who based the project on his own award-winning science fair project from over 40 years ago), afterimages represent metaphorically the idea that we can all change things depending on our perspective.

"I thought that this was a beautiful metaphor, literally 'a picture of change.' And it seemed to me that the best person to marry the art and science of this visual change was Barack Obama, whose very image and message embody change. Yet what I created is about more than Obama. It's about the hopes my generation had in the Sixties; the hope that we could change the world, rearrange the world - and through change make our planet a better place. As we enter a new era, I hope that everyone can envisage change." said Dr. Berger.

True to the desire to close the distance between science and art, the Optical Obama optical illusion is also available for viewing as a video clip, complete with rhyming couplet instructions and an original musical score.

About the EnvisageChange Team
We are a group of never-grew-out-of-it thinkers, dreamers and community actioneers in our 40s and 50s. We're not driven by political agendas but rather by the hope that talking about change can lead to actions and actually bring it about.

We are an unusual mix:

We're not looking for glory. We're looking for ways to engage in meaningful discussions about how to make life better. In all kinds of ways, large and small. For everyone.