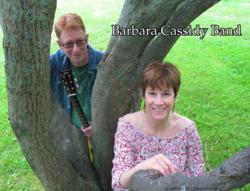 Barbara Cassidy Band - Leaving Things The Way I Found Them

Barbara Cassidy Band released their debut album, "Leaving Things the Way I Found Them," Tuesday, September 25th. Over the years, Barbara Cassidy and Eric Chasalow have traced their own adventures in electronic and classical music, rock, jazz, cabaret and musical theater, each world becoming a deeply felt part of their musical lives. Chasalow’s music has been embraced by performers throughout the world, with recent performances from Boston to Berlin and San Francisco to Seoul. When they became a couple, Barbara and Eric started working together to collect oral histories from musical pioneers.

The songs on "Leaving Things the Way I Found Them" include the first music that Barbara and Eric have created together. Most listeners will find something familiar, but they will also find something new in the way genres bend and collide in the shape of the tunes and the harmonies. These songs draw from tough and tender life lessons and from family stories. This is American folk music that reaches back into personal memory as a way of starting, but then can travel in almost any direction. The third track on the album, “Time Stood Still” has a classic country feel and uplifting lyrics that remind us all that “life isn’t meant to be wasted.” Another stand-out track is their cover of the traditional song “Wayfaring Stranger.” The chemistry between the couple really shines here. Chasalow’s dark and haunting guitar picking blends perfectly with Cassidy’s pristine vocal line floating above. The compositions on Leaving Things the Way…are both striking and comforting. It is a collection of folk songs that simply leave the listener feeling good.

For more information on this event, for press access, or to schedule an interview, please contact Melissa Zeigler at Powderfinger Promotions: melissa(at)powderfingerpromo(dot)com