Bawell Health Water published the report to inform the public that acidic ionized water had been scientifically proven to be a safe, chemical free green cleaning process for disinfecting meats and produce. 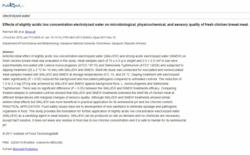 This study provides the foundation for further application of acidic ionized water as a sanitizing agent in meat industry.

Bawell’s report cites the scientific findings of the PMID 22260115 Abstract that was published by PubMed, which shows the positive effects of using slightly acidic low concentration electrolyzed (ionized) water as a Salmonella disinfectant for fresh chicken breast and other meat that could be infected with harmful bacteria. Visit NCBI.nlm.nih.gov to read the whole abstract on disinfection and cleaning meats with acidic water.

“Using acidic ionized water for cleaning food is becoming a very important green alternative to chemical disinfectants,” explains a Bawell representative. Who then went on to state, “Bawell Health Water researched many news articles on meat infected with harmful bacteria for their new report. Articles like the March 8th Seattle Times article, which was titled “Rise in salmonella cases spurs advice on safe handling of chicken” that can be read at SeattleTimes.com. The Seattle Times health reporter Carol M. Ostrom wrote that the outbreak, which has sickened at least 128 people in 13 states, including 56 in Washington, began last summer. More than 30%, including 15 Washington residents were hospitalized.”

“The problems don’t stop there, even pet food needs disinfecting,” the Bawell representative said, “news stories like these are why it was necessary to get the report published.” The representative from Bawell continued, “The Bawell report addresses concerns like the one published on March 14th by the news desk at Food Safety News. The published article was titled “Raw Frozen Chicken-Blend Pet Food Recalled for Salmonella” and can be read on the FoodSafetyNews.com website.”

Disinfecting meats and produce is only one of the uses and reasons why people buy water purification equipment, like the Bawell water ionizer machines. The newly published Bawell report covers the fact that Bawell water purifiers make both alkaline and acidic ionized water, to be used for many different solutions. The Bawell company has been producing alkaline water ionizer machines for the past ten years and is a strong advocate of the many uses of acidic and alkaline ionized water.